Sermon Preached before His Excellency Thomas Hutchinson, Esq; Governor: The Honorable His Majesty's Council, and the Honorable House of Representatives, of the Province of the Massachusetts-Bay in New-England, May 26th, 1773. Being the Anniversary of the.... 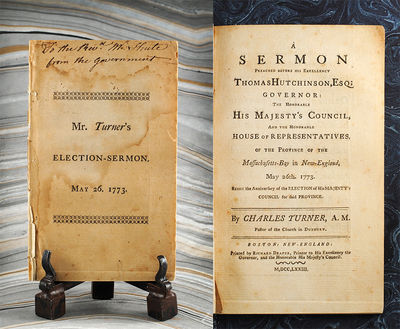 by TURNER, Charles.
Boston: Printed by Richard Draper, Printer to His Excellency the Governor, and the Honorable His Majesty's Council, New-England, 1773. Small 4to, original self-wrappers, preserved in modern brown cloth folding box with Plexiglas lid. [1(half-title)], [2(blank)], [3(title-page)], [4(Council Order)], [5]-45(text), [46(blank)] pp. Disbound, probably from a larger volume, dampstained, with some marginal tears and chipping; some internal spotting; but generally a clean, untrimmed copy with a very significant association. § First Edition. Inscribed at top of half-title: "To the Rev'd. Mr. Shute / from the government." Election sermons of this sort were an old tradition in the Colonies of Connecticut and Massachusetts, and the genre survived well into the 19th century. They offered the opportunity for a local clergyman on election eve to address a congregation full of eminent leaders on such issues as the rights and duties of citizens and electors in a Christian society. Daniel Shute (1722-1802), who was for many years pastor of the Third Church in Hingham, had preached a notable election sermon on May 25, 1768, before then-Governor Francis Bernard, Lieutenant-Governor Hutchinson, and other officials. His sermon, which has become a favorite of Libertarians and ultraconservatives, asserted -- in the context of the then-current controversy over the Townshend Acts -- the uncompromisable primacy of the innate natural rights of citizens in society. He warned the colonial and British administrations against any arbitrary use of power that might infringe on the liberty of the people. Rev. Charles Turner (1732-1818), the author of the present sermon, was for twenty years pastor of the church in Duxbury. Later in 1773 he was elected to the Senate of Massachusetts, where he served until 1778. He was a member of the Conventions which composed the Massachusetts State Constitution and ratified the Federal Constitution. Evans 13053. Goldsmiths-Kress 11051.4 (suppl.). Sabin 97475. OCLC cites 12 locations. (Inventory #: 6031)
$1,500.00 add to cart or Buy Direct from
John Windle, Bookseller
Share this item