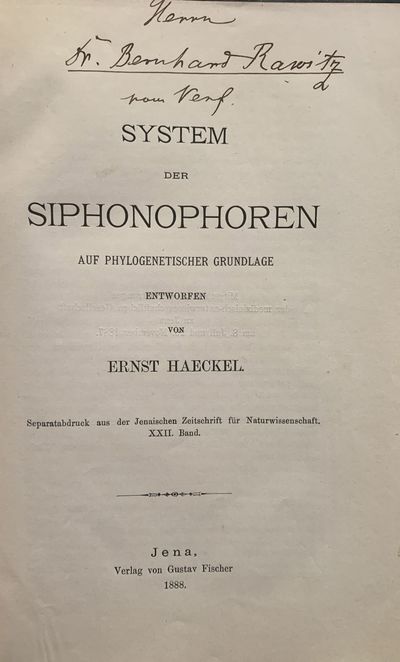 by HAECKEL, Ernst
Jena: [Hermann Pohle], 1895. FIRST EDITIONS. Three original offprints. Fro:m Jenaische Zeitschrift für Naturwissenschaft. Separately bound in recent boards. Presentation copies, signed by Haeckel to Dr. Bernhard Rawitz, anatomist from the University of Berlin. THREE VALUABLE PAPERS; ALL PRESENTATION COPIES. First editions. Following the publication of his Generalle Morphologie in 1866, Haeckel wrote a number of zoological monographs, containing reports of nearly four thousand new species of lower marine animals, most of which were gathered on the Challenger expedition. In addition to basic descriptions (many of which had never been done), Haeckel sketches a genealogical tree, taking Darwin's general theory of evolution to the next step in the lower marine animals.

Haeckel (1834-1919), the great naturalist and professor of zoology at Jena, spent a year in Berlin studying under Müller, whom he regarded as his true master and who inspired him with a love for marine research. (Inventory #: 10488)
$2,500.00 add to cart or Buy Direct from
Rootenberg Rare Books
Share this item