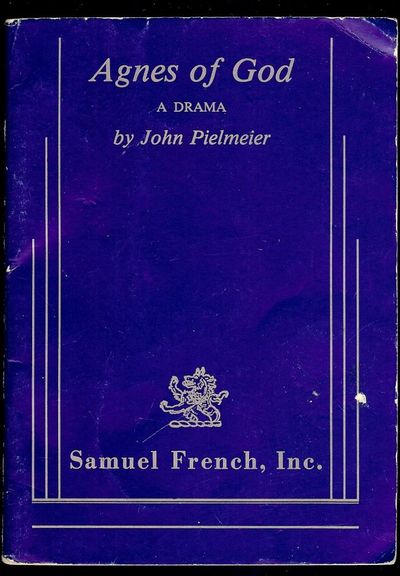 by PIELMEIER, John
1982. PIELMEIER, John. AGNES OF GOD. NY: Samuel French, 1982. 16mo., in printed wraps. First Edition thus. Signed by Pielmeier on the title page. The play opened on Broadway on March 30, 1982 with a cast including Elizabeth Ashley, Geraldine Page, and Amanda Plummer in the lead role. In 1985 it was brought to TV by director Norman Jewison, with another formidable cast: Jane Fonda, Anne Bancroft, and Meg Tilly, who won a Tony Award for Best Supporting Actress. Very Good (several nicks, scratches, and creases). $65.00. (Inventory #: 54294)
$65.00 add to cart or Buy Direct from Antic Hay Books
Share this item
Antic Hay Books
Offered by

THE END OF INNOCENCE: A MEMOIR

by BONO, Chastity. [With Michelle KORT]

[Los Angeles] : Advocate Books , 2002
(click for more details about THE END OF INNOCENCE: A MEMOIR)

A SPY IN CANAAN: HOW THE FBI USED A FAMOUS PHOTOGRAPHER TO INFILTRATE THE CIVIL RIGHTS MOVEMENT

Brooklyn : Melville House , 2007
(click for more details about A SPY IN CANAAN: HOW THE FBI USED A FAMOUS PHOTOGRAPHER TO INFILTRATE THE CIVIL RIGHTS MOVEMENT)
View all from this seller>