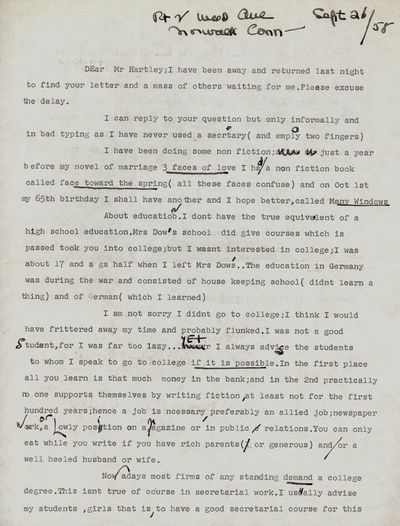 by BALDWIN, Faith
1958. BALDWIN, Faith. Typed Letter Signed. Two pages on both sides of a single sheet; hand-written in ink: "Rt. 2 Meed Ave., Norwalk, Conn, Sept. 26/58." Note: There are numerous typing errors and hand-written corrections in ink throughout the letter and spelling errors are, for the most part, not noted in the follow textual description- as there are many. To a teacher in California, Baldwin apologizes for the delay in her response to several questions posed by the teacher. "I can reply to your questions only informally and in bad typing as I have never used a secretary (and employ two fingers)." Baldwin discusses several of her books and writes that Many Windows will be published on her 65th birthday. "About education. I don't have the true equivalent of a high school education. Mrs. Dow's school did give courses which if passed took you into college; but I wasn't interested in college; I was about 17 and a ga half [sic] when I left Mrs. Dow's. The education in Germany was during the war and consisted of house keeping school (didn't learn a thing) and of German (which I learned). I am not sorry I didn't go to college; I think I would have frittered away my time and probably flunked. I was not a good student, for I was far too lazy." Baldwin goes on, in some detail, about advising students to go to college "if it is possible" and discusses the benefits of a college education and the difficulty of supporting herself as a writer. "You can only eat while you write if you have rich parents (or generous) and/or a well-heeled husband or wife." Baldwin writes about the demands for college degrees in the business world and says she always advises her students to at least have a good secretarial degree "for this is really an open door... I have seen one advance from typist to private secretary to asst. editor and then editor on a national magazine." Baldwin continues about her father's profession (lawyer) and her mother's (a grade-school teacher) and her family's background (missionaries, editors, etc.). "It's tougher if you are born into a family without the cultural background but that can be overcome by education." She writes "in this era a college education is extremely valuable and certainly a high school education a must." Also signed by Baldwin as "Mrs. Hugh Cuthrell." Baldwin was known for typing her manuscripts quickly, but inaccurately, and. (Inventory #: 25117)
$275.00 add to cart or Buy Direct from Antic Hay Books
Share this item
Antic Hay Books
Offered by

EURIPIDES IN CINEMA: THE HEART MADE VISIBLE

Philadelphia : Centrum Philadelphia , 1983
(click for more details about EURIPIDES IN CINEMA: THE HEART MADE VISIBLE)

NY : Alfred A. Knopf , 2001
(click for more details about SHIKSA GODDESS OR, HOW I SPENT MY FORTIES)
View all from this seller>