1959 Conceptual Drawing of a Sports Car 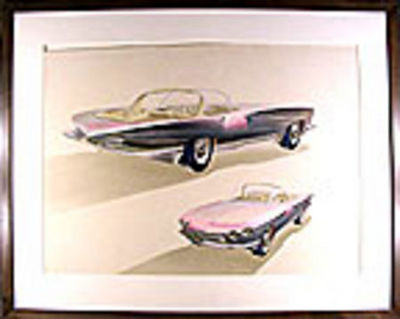 by LAWSON, George (?)
Mixed media on paper. Initialled, "G. L." 1959 concept design that embodies many features of the 1960s Chevrolets.

George Lawson was a long-time Detroit designer, who contributed to the Tucker, particularly the Torpedo, as well as to many General Motors' designs. His imaginative renderings reflect the optimism of the American automotive industry as we entered the "Space Age". The drawing is signed "G. L." and the attribution is based on similar drawings. The car is depicted front and back, so that all its charms can be observed, including the angled back fins, dual headlights and domed, glass top. The angled fins famously appeared in the same year on the Chevy Impala. (Inventory #: 18771)
$4,500.00 add to cart or Buy Direct from
Donald A. Heald Rare Books
Share this item
Donald A. Heald Rare Books
Offered by