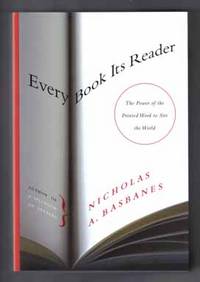 by Basbanes, Nicholas A.
New York: Harpercollins. As New in As New dust jacket. 2005. First Edition; First Printing; Signed by Author. Hardcover. 0060593237 . A most stunning first edition/first printing in As New/As New condition in alike dust-jacket, SIGNED by author Nicholas A. Basbanes on the title page; Basbanes also asks what we can know about such figures as John Milton, Edward Gibbon, John Locke, Isaac Newton, Samuel Taylor Coleridge, John Adams, Frederick Douglass, Abraham Lincoln, Henry James, Thomas Edison, Helen Keller -- even the notorious Marquis de Sade and Adolf Hitler -- by knowing what they have read. The Books that many of these people have consulted, can offer tantalizing clues to the evolution of their character and the development of their thought . (Inventory #: 13365)
$119.00 add to cart or Buy Direct from
Books Tell You Why
Share this item
Books Tell You Why, Inc.
Offered by

Vancouver : Heavenly Monkey , 2020
(click for more details about Books Are My Utopia)
View all from this seller>