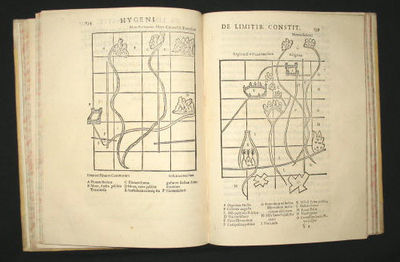 by [Galland Pierre, ed.]
Paris A. Turnèbe, 8 cal. December, 1554.. Sm. 4to. (8 3/8 x 6 5/8 inches), 18th century 3/4 vellum over paper-covered boards, title lettered in hand on the spine; edges sprinkled in a red and blue marbled pattern. A FINE COPY.First edition of these ancient texts on surveying, edited by Galland and Adrien Turnèbe from a manuscript which they found in the library of a monastery of the Saint-Bertin at Saint-Omer. And as Ruth Mortimer points out, although the title-page fails to name the editor, Galland's name heads the dedication to the cardinal de Lorraine on leaf *2r. The title-page is without ornamentation; there are, however, five-line decorated woodcut initials and occasional headpieces. "Thirteen full pages of woodcuts of land measurement conclude the commentary of Aggeneus Urbicus on Frontinus, ll K3v-M1v. The succeeding texts are illustrated with 134 similar subjects and diagrams, in addition to nine pages of the symbols used in recording surveys. (Mortimer/French. 244). See also: Maittaire. Historia. II, p. 54. NOT IN Brunet, Murray, Rothschild, or Brun. Just THREE COPIES are cited in OCLC: Stanford NYPL, and Oxford.  16th C. Work ON SURVEYING WITH WOODCUTS (Inventory #: 3750.8 cal. December, 155)
$3,750.00 add to cart Available from Book Block
Share this item
The Book Block
Offered by