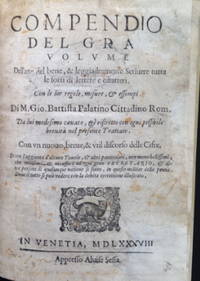 by Palatino Gio. Battista
Venice Gio. Antonio Rampazetto for] A. Sessa, 1588. Sm. 4to., recent full vellum over stiff boards with a decorative gilt frame border [acorns and leaves]; four corner fleurons and a larger central gilt device. Square spine with gilt bands, acorns & leaves in the compartments, in the manner of a contemporary binding. Professional repairs to the title-page with the loss of a few letters and the last part of the date, which have been supplied in manuscript facsimile; the lower corner of A2 and a small piece of the border has been skilfully repalaced. Occasional soiling and light water staining to the lower portion of the leaves in the last three signatures. A few marginal notes [the names Andras Praga and Andreas Praga] towards the front and some faded notes on the blank verso of the Moth & Candle full-page device [Palatino's personal emblem], opposite Rampazetto's colophon.62 ff , A-G8; H6; it collates according to the copy described and illustrated in Morison/Marzoli Calligraphy: 1535-1885, Item No. 3 [1578], in which the original blocks of the 1540 edition are also used from C4 to the end. On the verso of the letterpress title-page is the woodcut portrait of Palatino, followed by a Sonnet by Tomasso Spica in italic. The next seven pages contain the IMPORTANT New Preface in italic by Palatino, in which [according to James Wardrop], "...[he] comes to terms with that larger public from which he had always held himself aloof." This is followed by a "Woodcut plate with [the] title written in very beautiful Chancery letter [Morison]." Palatino had two professions, that of writing-master and that of notary "by Apostolic authority." His writing book is very diverse, the first part dealing systematically with the chancery cursive. The next section on cryptography is entirely original (probably a result of Palatino's friendship with Trifone Benzi, according to Osley). The third section abandons the realms of practical handwriting for those of fantasy. "There are monograms of intertwined Roman capitals," according to Osley, "a rebus, and assorted exotic alphabets--Greek, Hebrew, Chaldean, Arabic, Egyptian, Indian, Syrian, Saracen--each framed in a cartouche but without any explanatory matter." In spite of these "excesses," Palatino devoted most of his attention to the chancery cursive hand because of its continuing popularity in Rome. The book closes with a section advising on the selection of writing instruments, recipes for ink, cutting the quill and learning to write (he advises that one should go to a master). Giovanni Battista Palatino (born in the Calabrian town of Rossano), was, above all, extraordinarily proud of the Roman citizenship he acquired in 1538. See: Bonacini 1343. Brunet IV, 314. Morison/Marzoli 3. Osley, A. S. Luminario. pp. 46-58. Palatino deservedly enjoyed widespread fame and popularity." MORISON (Inventory #: 3750.1588)
$3,250.00 add to cart Available from Book Block
Share this item
The Book Block
Offered by