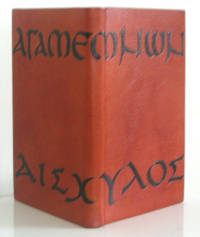 by ÆSCHYLUS
Greenbrae The Allen Press, 1982-83. Two vols., tall 8vo. Volume I bound in full native dyed terra-cotta goatskin with black onlays, blind tooled, carrying, in black Greek characters, the name Agamemnon across the top of the front and back boards (and spine), and the name Æschylus across the bottom. Full black goatskin inner doublures, leather joints, red Japanese endpapers, silk headbands. Volume II in a similar design but with the colors reversed; across the top, in terra-cotta Greek characters, is the word Choephoroi, and across the bottom is the word Eumenides. The doublures are terra-cotta, the joints, endpapers and headbands as before. Each is housed in a quarter-morocco clam-shell case. Each volume is signed by the binder.Limited to 140 copies by the Allen Press, they were the only limited edition in English translation, and represent the 48th and 49th books of the press. The type is Menhart Unciala, printed in black and brown; the running heads are Solemnis and Libra types, Greek-letter calligraphy and decorations are from Greek sources. The all-rag paper is handmade and especially watermarked at the Richard de Bas mill in France. The books were printed on dampened sheets on an Albion press made in Scotland in 1882.Denise Lubett, Fellow of the Designer Bookbinders since 1971, is one of the 38 binders who was asked to contribute a chapter to A Bookbinders' Florilegium, a publication of the H.R.C., in which these artist-craftsmen talk about their approach to the art of binding books. We quote: "...great purity of style and design usually bring forth great beauty...if we no longer bind books so that they become too fragile to handle...if we can ascertain that this bound book can be handed down for a number of generations, then we will have achieved a better and more significant role as modern bookbinders." The volume we are offering epitomizes these ideas. The Oresteia is a trilogy of Greek tragedies written by Aeschylus. The first story concerns the king Agamemnon who returns from the Trojan War to face the wrath of his wife, Clytemnestra, for sacrificing their daughter. To make matters worse, Agamemnon is accompanied by his concubine, Cassandra. While bathing, Agamemnon is murdered by his wife, and Cassandra is killed too. In the second play, Choephoroi, Clytemnestra sends her surviving daughter, Electra, to Agamemnon’s grave, where she happens to meet her brother, Orestes. The siblings talk and eventually discuss a plot to avenge the murder of their father. The plan works, and Orestes kills his mother and her new husband. Orestes becomes tormented by the “Furies” since matricide is particularly horrific. Eumenides, the final play in the trilogy, addresses whether the Furies torment of Orestes is justified. Events leading up to a trial by 12 Athenians involve, among others, Apollo and Hermes. At the trial, Orestes is represented by Apollo, and the Furies represent the other side. At the end of the trial, the jury is evenly split, and Orestes is relieved of the wrath of the Furies.  THE ALLEN PRESS PRINTING BOUND BY DENISE LUBETT (Inventory #: 5500.1982-83)
$5,500.00 add to cart Available from Book Block
Share this item
The Book Block
Offered by