Town & Country magazine: original cover treatments, pencil and gouache on paper of a cluster of palms with the sea in background, seen through an arched doorway 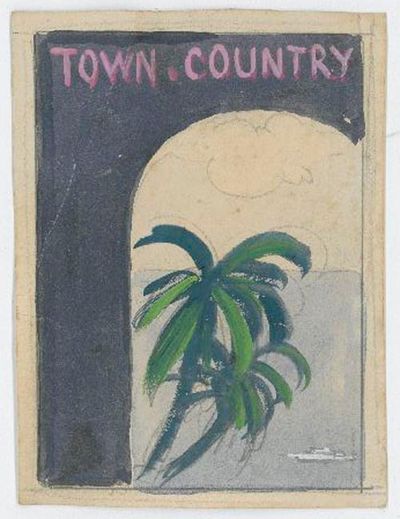 by (Fashion) Luza, Reynaldo
n.p., 1950. 1 vols. Image approximately 6 x 4-1/2 inches, matted to 12 x 10-1/2 inches. Creased across upper left corner, light spotting. 1 vols. Image approximately 6 x 4-1/2 inches, matted to 12 x 10-1/2 inches. Reynaldo Luza (1893-1978), pre-eminent fashion artist, was born in Lima, Peru. He began training as an architect at the University of Louvain, Belgium, but returned to Peru at the outbreak of World War I, where he changed his studies from architecture to art. In 1918 he came to the United States, where he earned his living by contributing drawings to several fashion publications, principally VOGUE, HARPERS BAZAAR, and VANITY FAIR. In 1921 he joined HARPERS BAZAAR as the principal fashion artist, a position he was to hold for 27 years. He divided his time between New York, Paris and London, working closely with all of the leading fashion designers of the times--Poiret, Patou, Lelong, Paquin, Douillet, Doucet, Cheruit, Worth, Drecoll, Callot Soeurs, Redfern, Martial et Amand, Premet, Reboux, Chanel, Vionnet, Molyneaux, Schiaparelli, Hartnell, Steibel, and Balenciaga, among others. In 1940 Luza made New York his principal base, where, over the next few years, he continued his activities at Harpers as well as creating fabric and furniture designs, and the costumes for the movie "The Bridge of San Luis Rey". Among other distinctions, he received several honorary appointments from the government of Peru, including that of Artistic Director of the Paris Exposition of 1938 and the New York World's Fair of 1939-40; he also did the interior design of the new Lima airport. In 1950 Luza returned to Peru, where he began a second career as a portrait painter, exhibiting his work over the next few years in Paris, New York, and Washington, D.C. (Inventory #: 245213)
$300.00 add to cart or Buy Direct from
James Cummins Bookseller
Share this item
James Cummins Bookseller Inc.
Offered by