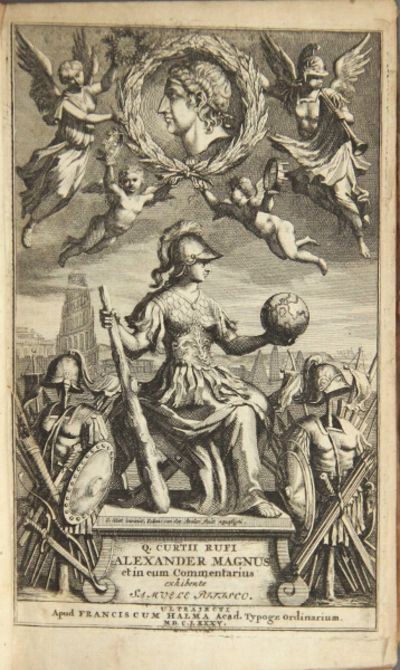 by Rufus, Q. Curtius
Ultrajecti: Franciscum Halma, 1685. Thick 8vo, pp. [36], 1-847, [256]; engraved title page, folding engraved map and 10 engraved plates (6 folding); a nice copy in old paste-paper boards, neatly rebacked in brown calf gilt, red morocco label. Alexander (356-323 B.C.) devoted himself early to invading the Persian Empire and other parts of Asia which had been a part of his inheritance, liberated the Greek cities there, occupied Phoenicia, Palestine and Egypt, and in his greatest military achievement, captured the city of Tyre, from which time Persia ceased to be a military power. This edition contains a chronological synopsis, Alexander's genealogy, and interesting illustrations of ancient monuments. (Inventory #: 9104)
$517.50 add to cart or Buy Direct from
Rulon-Miller Books
Share this item