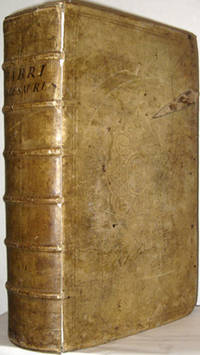 by FABER, BASILIUS
Lipsiae: sumtibus Johannis Friderici Gleditsch, 1692. Folio, 12 p.l., 2934 columns (thus paged), [92] leaves; engraved pictorial title-p., vignette title-p. printed in red and black; text in double column; woodcut head-pieces and initials; full contemporary vellum, blindstamped panel and arabesques on both covers, spine in 7 compartments, manuscript lettering in 1; front joint cracked, vellum soiled; good and sound. Basil Faber (1520-1576), Lutheran schoolmaster and theologian, was born at Zary in 1520. In 1538 he entered the University of Wittenberg, studying as pauper gratis under Philipp Melanchthon. Choosing the schoolmaster's profession, he became successively rector of the schools at Nordhausen, Tennstadt (1555), Magdeburg (1557) and Quedlinburg (1560). From this last post he was removed in December 1570 as a crypto-Calvinist. In 1571 he was appointed to the Rathsgymnasium at Erfurt, not as rector, but as director. In this situation he remained till his death in 1575 or 1576. His translation of the first twenty-five chapters of Luther's commentary on Genesis was published in 1557; in other ways he promoted the spread of Lutheran views. He was a contributor to the first four of the Magdeburg Centuries. He is best known by his Thesaurus eruditionis scholasticae (1571; last edition, improved by J. H. Leich, 1749, folio, 2 vols.); this was followed by his Libellus de disciplina scholastica (1572). (Inventory #: 30877)
$747.50 add to cart or Buy Direct from
Rulon-Miller Books
Share this item