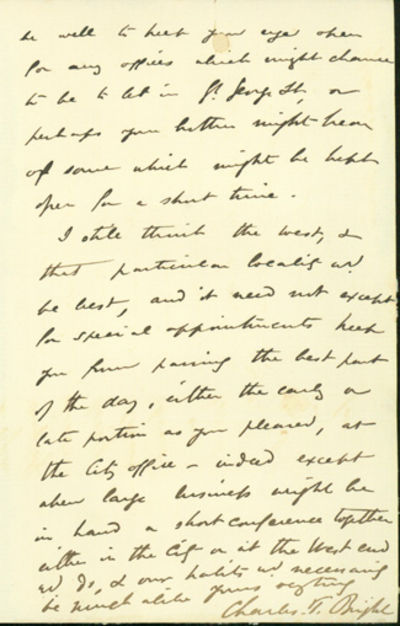 by Bright, Charles Tilston
London, 1861. Very Good. Bright, Charles Tilston (1832-88). A.L.s. to Latimer Clark. London, January 31, 1861. 2pp. 178 x 110 mm. Remains of mounting on verso of second leaf. Provenance: Latimer Clark. Bright was engineer-in-chief of the Atlantic Telegraph Company, formed by himself, Cyrus Field, George Saward, and J. W. Brett in 1856 for the purpose of manufacturing and laying the first transatlantic cable. Bright superintended the laying of the first complete Atlantic telegraph cable in 1858, receiving a knighthood for his services even though the cable failed a few weeks after its installation. In 1861 Bright went into partnership with Latimer Clark, with whom he developed improved methods of insulating telegraph wires; the two men also wrote an influential paper, "On the formation of standards of electrical quantity and resistance" (1861), which led to the British government's adoption of fixed electrical standards. Bright's letter to Clark dates from the early days of their partnership; it discusses the possibility of finding a office in the west end of London for their business, known as Bright and Clark. Origins of Cyberspace 128. (Inventory #: 40721)
$500.00 add to cart or Buy Direct from
Jeremy Norman & Co.
Share this item
Jeremy Norman & Co., Inc.
Offered by