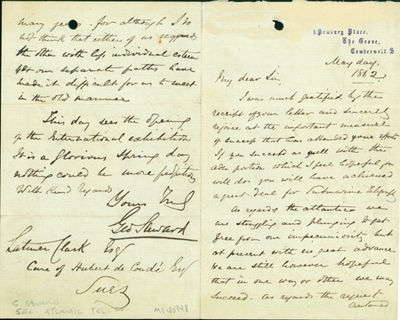 by Saward, George
1862. Very Good. Saward, George. A.L.s. to Latimer Clark. Camberwell, "May Day," 1862. 4pp. 157 x 100 mm. Small holes punched in upper margin, traces of mounting present. Provenance: Latimer Clark. Saward was a founding member of Cyrus Field's Atlantic Telegraph Company, serving as the firm's secretary. His letter discusses the company's attempts to obtain financing for its second Atlantic cable venture, which took place in June 1865. Also mentioned is a growing rift between Charles Tilston Bright, another of the company's founding members, and the company's board of directors: "As regards the Atlantic we are struggling and plunging to get free from our impecuniosity but at present with no great advance. We are still however hopeful that in one way or other we may succeed. . . . "I ought not however to conceal from you that the warm & perhaps under all circumstances not unnatural, hostility of Sir Charles to our Board and the corresponding feeling of dislike on the part of some members of it come in unfortunately at this particular juncture, not as I trust to create any prejudice as against yourself but to render your own personal explanations and assurances very desirable toward the accomplishment of your views. "It is feared that the influence & representations of Sir Charles have much retarded our progress with Government-if not so acted upon them as to cause the refusal of our permanent guarantee without which our hope of success is very much diminished. "I mention all this in great sorrow as the severance of the connection between Bright & our company has been to some extent also the severance of a close and warm friendship between him and me. . . ." Origins of Cyberspace 191. (Inventory #: 40748)
$1,250.00 add to cart or Buy Direct from
Jeremy Norman & Co.
Share this item
Jeremy Norman & Co., Inc.
Offered by