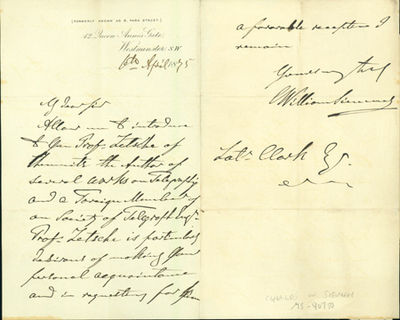 by Siemens, Charles William
1875. Very Good. Siemens, Charles William (1823-83). Autograph letter signed to Latimer Clark. London, April 6, 1875. 1- pp. 203 x 125 mm. Remains of mounting present. Provenance: Latimer Clark. Siemens, one of the most successful inventors and entrepreneurs of the nineteenth century, was a younger brother of Ernst Werner Siemens, discoverer of the gutta-percha method of insulating telegraph cables, who in 1847 had cofounded the German telegraph firm of Siemens and Halske. William Siemens (he never used the name Charles) served as the London agent of Siemens and Halske; in 1866, with Werner and two other brothers, he established a submarine cable manufacturing company in England under the name of Siemens Brothers. Two of the major undertakings of this company were the telegraph line between Prussia and Teheran, which formed a major part of the England-to-India line, and the direct Atlantic cable laid in 1874. Siemens's letter to Clark introduces Professor Karl Edouard Zetzsche, a German engineer and author of numerous works on telegraphy. Origins of Cyberspace 198. (Inventory #: 40750)
$375.00 add to cart or Buy Direct from
Jeremy Norman & Co.
Share this item
Jeremy Norman & Co., Inc.
Offered by