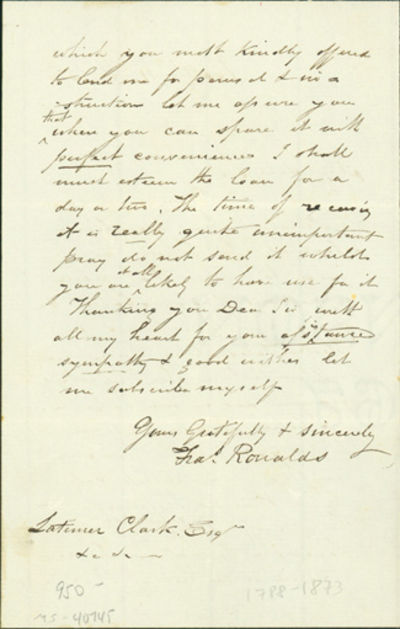 by Ronalds, Francis
1870. Very Good. Ronalds, Francis (1788-1873). A.L.s. to Latimer Clark. Battle, April 11, 1870. 2pp. 181 x 114 mm. Provenance: Latimer Clark. Ronalds invented the first working electric telegraph in 1816. His device involved two synchronized clocks whose dials were marked with the letters of the alphabet; instead of hands, each clock had a rotating disk with a notch cut into it so that only one letter on the clock face was visible at a time (Standage 1998, 19). Ronalds placed one clock at each end of eight miles of insulated wire that he had laid down in his garden, and used electrical impulses to transmit signals between them. He wrote to Lord Melville of the British Admiralty offering to demonstrate his telegraph, but was rejected: John Barrow, secretary to the admiralty, wrote back to Ronalds saying that "telegraphs of any kind are now [after the conclusion of the Napoleonic wars] totally unnecessary, and that no other than the one now in use [a semaphore telegraph] will be adopted" (quoted in DNB). Ronalds did not pursue his telegraphy venture any further, but left a record of it in his Descriptions of an Electric Telegraph and of Some Other Electrical Apparatus (1823; reprinted in 1871 at the suggestion of Latimer Clark). It was left to Charles Wheatstone and William Fothergill Cooke, both of whom knew of Ronalds's experiments, to develop the first telegraph adopted for public use in Britain in 1845. In 1871, in response to a petition submitted the previous year to Prime Minister William Gladstone, Ronalds received a knighthood for his contribution to telegraphy. His letter to Clark expresses his gratitude for this honor and for Clark's part in it: "Your kind congratulations are peculiarly esteemed; for I have every reason to believe that your expressions of approbation &c. of my humble labours in Electro-Telegraphy have been influential in Her Majesty's gracious act in my behalf. "I believe it is almost needless to tell you that the honour conferred is much less valued by me than the testimony it helps to afford to the validity of my early labours in the matter. . . . " Origins of Cyberspace 187. (Inventory #: 40745)
$950.00 add to cart or Buy Direct from
Jeremy Norman & Co.
Share this item
Jeremy Norman & Co., Inc.
Offered by