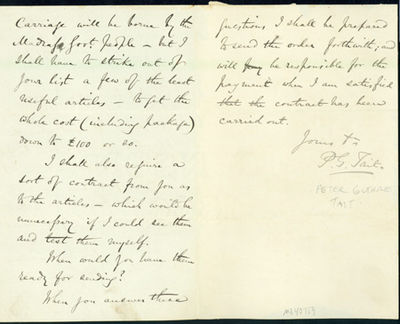 by Tait, Peter Guthrie
1868. Very Good. Tait, Peter Guthrie (1831-1901). Autograph letter signed to [Josiah] Latimer Clark (1822-98). Edinburgh, July 27, 1868. 2 pp. 178 x 114 mm. Remains of mounting on blank verso of last page. Very good. From mathematician and physicist Peter Guthrie Tait, professor of natural philosophy at Edinburgh and co-author (with William Thomson) of the classic Treatise on Natural Philosophy (1867), a work that helped to define the modern discipline of physics. Tait's correspondent, Latimer Clark, was an electrical engineer and pioneer in submarine telegraphy; he worked on the Atlantic cable and in 1868 founded the company of Clark, Forde and Taylor, one of the leading submarine cable-laying firms of the nineteenth century. Clark was also an enthusiastic bibliophile, amassing an impressive library of nearly six thousand works on electricity and magnetism documented in the Catalogue of the Wheeler Gift (1909). Tait's letter, regarding the ordering of some mechanical apparatus from Clark, reads in part as follows: "Not being able to come to London myself, I asked my colleague Prof. Jenkin to report upon the apparatus you offer m. His report is, on the whole, satisfactory-but I am not quite sure about the Willis' Mech. Powers-will the wood stand the climate? If so, I must have them. Will you give me an estimate of the charge for packing (very securely) the whole collection? The expense of insurance and of carriage will be borne by the Madras govt. people . . . "Prof. Jenkin" refers to Fleeming Jenkin (1833-85), professor of engineering at the University of Edinburgh and a collaborator with Clark and William Thomson on the Atlantic cable and other important submarine telegraphy ventures. Dictionary of Scientific Biography. (Inventory #: 40759)
$850.00 add to cart or Buy Direct from
Jeremy Norman & Co.
Share this item
Jeremy Norman & Co., Inc.
Offered by