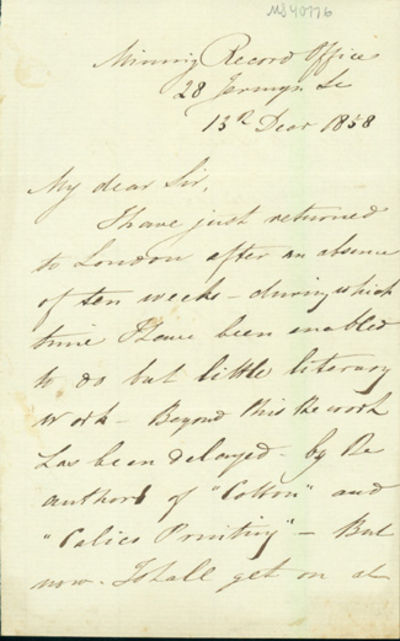 by Hunt, Robert
1858. Very Good. Hunt, Robert (1807-87). A.L.s. to Charles Vincent Walker (1812-82). [London], December 13, 1858. 1- pp. 183 x 116 mm. Provenance: Latimer Clark. Hunt made notable contributions to photography, and performed significant research on the chemical action of light. He held the government post of keeper of the mining records from 1845 to 1882, and published an annual Mineral Statistics of the United Kingdom from 1855 to 1884. He also edited the fifth and later editions of Andrew Ure's "Dictionary of Arts, Manufactures and Mines," a job touched on in the present letter: "I have just returned to London after an absence of ten weeks--during which time I have been enabled to do but little literary work. Beyond this the work has been delayed by the authors of "Cotton" and "Calico Printing . . ." Hunt's correspondent, Charles V. Walker, had been involved in telegraphy since the 1840s; in 1848 he sent the first submarine telegraph message from a ship connected by two miles of cable to London Bridge, and in 1876 he served as president of the Society of Telegraph Engineers and Electricians. Origins of Cyberspace 164. (Inventory #: 40776)
$450.00 add to cart or Buy Direct from
Jeremy Norman & Co.
Share this item
Jeremy Norman & Co., Inc.
Offered by