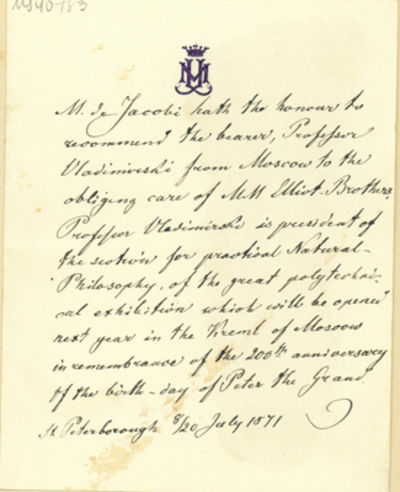 by Jacobi, Moritz Hermann von
1871. Very Good. Jacobi, Moritz Hermann von (1801-74). A.L. to Elliot Brothers. St. Petersburg, "8/20 July," 1871. 1 page plus integral blank leaf. 129 x 101 mm. Remains of mounting present. Provenance: Latimer Clark. Jacobi, a German-born physicist, spent most of his career at the Imperial Academy of Sciences at St. Petersburg, where he performed researches on electricity and its applications. He built one of the first practical electric motors in 1834, and in 1839 invented an electromagnetic telegraph similar to Morse's first receiver. The above letter is a letter of introduction for a Professor Vladimirski of Moscow, "president of the section for practical Natural-Philosophy, of the great polytechnic and exhibition which will be opened next year [1872] . . . in remembrance of the 200th anniversary of the birth-day of Peter the Grand." Origins of Cyberspace 165. (Inventory #: 40783)
$600.00 add to cart or Buy Direct from
Jeremy Norman & Co.
Share this item
Jeremy Norman & Co., Inc.
Offered by