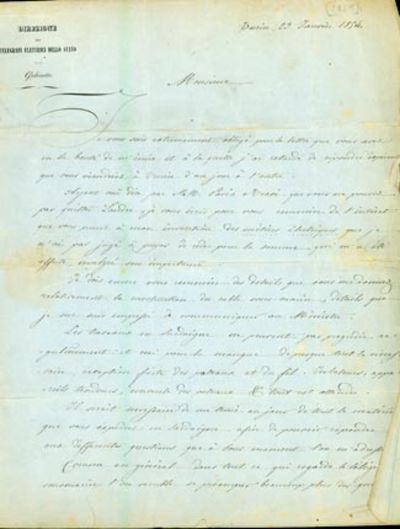 by Bonelli, G.
1854. Very Good. Bonelli, G. A.L.s. to John Brett (1805-63). Turin, January 23, 1854. 1- pp. plus integral address leaf. 275 x 217 mm. Holes where seal was cut away, light soiling along folds. Provenance: Latimer Clark. Bonelli's correspondent, John Brett, laid the first submarine cable between England and France in 1850, and has been described as the founder of submarine telegraphy. Bonelli's letter, written in French, thanks Brett for "des details que vous me donnez relativement la construction du cable sous-marin" (the details that you give me about the construction of the submarine cable), and gives news about his own telegraph ventures. Origins of Cyberspace 123. (Inventory #: 40785)
$650.00 add to cart or Buy Direct from
Jeremy Norman & Co.
Share this item
Jeremy Norman & Co., Inc.
Offered by