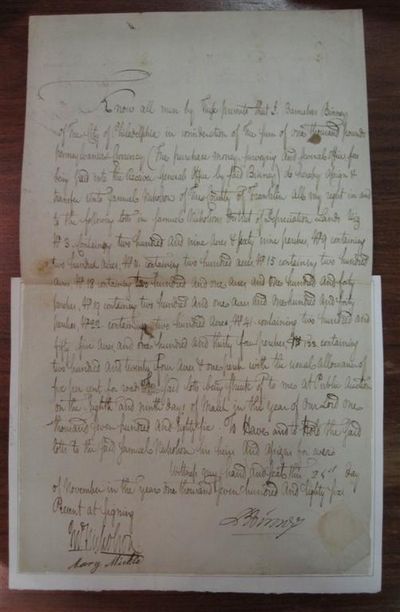 by BINNEY, Barnabas (1751 - 1787)
1786. unbound. Exceedingly rare and historically important autographed document signed, 2 pages (front and back), oversize folio, 14.75 x 9 inches, signed twice "Barnabas Binney" (obverse and recto), November 21, 1786. In this document, Binney is agreeing to sell his various accumulated parcels of land under the guidance of Samuel Nicholson, in small part: "...in consideration of the sum of one thousand pounds Pennsylvania currency...I do hereby assign unto Samuel Nicholson, of the County of Franklin, all my right and title in the following parcels." He then proceeds to list extensive real estate holdings. Also signed by George Bryan (1731-1791), who was the first Vice President of Pennsylvania and its second President following the Declaration of Independence, outlining the arrangement that has been made with "Dr. Barnabas Binney." Binney is considered one of the most honorable and compassionate surgeons to have served in the Continental Army during the American Revolution. The war took a terrible toll on Binney's life and he died at age 36 in Philadelphia. (Inventory #: 213073)
$2,000.00 add to cart or Buy Direct from
Argosy Book Store
Share this item