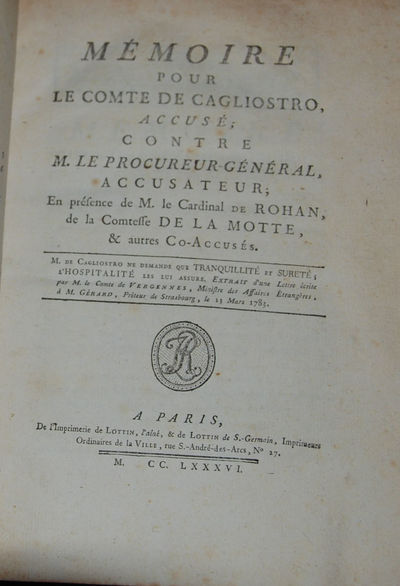 Paris, 1792. The pamphlets are: (1) MEMOIRS POUR LE COMTE DE CAGLIOSTRO, ACCUSE; CONTRE M. L. PROCUREUR-GENERAL, ACCUSATEUR; en prefence de M. le Cardinal de Rohan, de la Comtesse de la Motte, & autres Co-Accuses. Paris: Lottin, 1786. First edn. pp. 51. Bound With: (2) REPONSE POUR LA COMTESSE DE VALOIS-LA MOTTE, au memoire de Comte De Cagliostro. Paris: Cellot, 1786. First edn. pp. 48. Bound With: (3) DEFENSE A UNE ACCUSATION D'ESCROQUERIE. Memoire a Consulter et Consultation. First edn. pp. 30. Bound With: (4) SUPPLEMENT ET SUITE AUX MEMOIRES DE SIEUR DE BETTER D'ETIENVILLE, Ancien Chirurgien sous-aide-major, pour servir de Reponse aux differens Memoires faits contre lui. Paris: Cailleau, 1786. First edn. pp. 69. Bound With: (5) REPONSE DE M. LE COMTE DE PRECOURT, Colonel d'Infanterie, Chevalier de l'Ordre Royal & Militaire de Saint Louis; aux Memoires des sieurs D'Etienville, Vaucher & Loque. Paris: Prault, 1776. First edn. pp 42. Bound With: (6) MEMOIRE DE M. DE CALONNE Ministre D'Etat, contre le decret rendu le 14 fevrier 1791 par l'assemblee se distant nationale. Large 8vo, the whole bound in rubbed contemporary calf, rebacked in calf. Some scattered staining and toning, but the pamphlets are in very good condition. Comtesse de La Motte, Jeanne de Saint-Remy de Valois, (1756-1791) was a central figure in what became known as "the affair of the Diamond Necklace". Called by historians an "adventuress", La Motte is said to have duped Cardinal Rohan, the grand almoner, who was out of favor with Queen Marie Antoinette, into believing that La Motte could curry the Queen's favor for him. La Motte and her "accomplises" then arranged a sham correspondence between the Cardinal and the Queen in which she was supposed to have expressed an interest in a diamond necklace. After the Cardinal secured the necklace for her and turned it over to La Motte, La Motte's husband took it to London where it was broken up for sale. The affair became public after the Cardinal was unable to keep up the payments to the jeweler. The Cardinal was arrested and acquitted and La Motte was imprisoned before escaping to London where she published her memoirs. A vast literature came into being concerning the affair including Dumas', "The Queen's Necklace" and Carlyle's "Diamond Necklace." In the first piece Count Cagliostro defends himself. In the second piece, The Countesse calls Cagliostro a fraud. The third is a defense against the accusation of D'Escroquerie. The fourth is by Jean Charles Vincent de Bette d'Etienville who became involved when he persuaded the Baron de Fages-Chaulnes to marry one of Cardinal Rohan's mistresses, as a result the Baron ran up a steep debt with Vaucher & Loque, a pair of jewelers. As the Baron was involved in an intrigue with the Cardinal and had also been used as a fence for the diamonds, and the prevailing mood was "arrest everyone.," d'Etienville found himself a defendant ... This eventually also involved the innocent Comte de Precourt. In the fifth piece Comte de Precourt, a widely-traveled and distinguished infantry colonel, was swept into the affair when he guaranteed the debt of fellow soldier, the Baron de Fages-Chaulnes. Again, the "arrest everyone first and sort them out late" ethic prevailed and Le Comte became a defendant. The 6th and final piece: The Charles Alexandre de Calonne was a friend of de Polignacs, intimate of Marie Antoinette and succeeded Jacques Necker as Finance Minister of France. Necker (Madame DeStael's father) borrowed vast sums to pay France's debt and he was replaced by Colonne who was himself sacked when he suggested taxing the nobility. Necker was returned to office and his subsequent firing was the spark that led to the storming of the Bastille and the beginning of the French Revolution. Colonne and Necker engaged in a furious pamphlet war. Here Colonne defends the Polignacs against a judgment of 8,000,000 livres. (Inventory #: 44652)
$1,980.00 add to cart or Buy Direct from
Second Life Books
Share this item