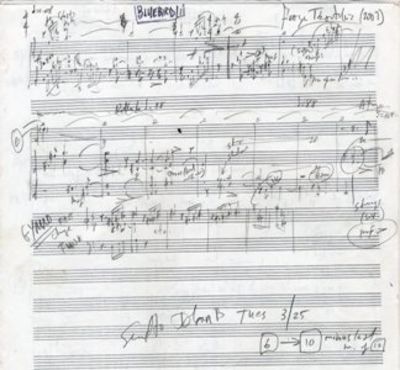 "[His] early works are written in a dissonant chromatic idiom not unlike that of Sessions. His musical language soon shifted, however, towards a classically-influenced style characterized by large-scale harmonic prolongations and what he calls 'the timeless gesture', a reference to the past through evocation rather than quotation. With the String Quartet no. 3 'Carragio' (1986) he arrived at an idiosyncratic tonal language propelled by a non-minimalist, Beethovenian use of repetition. Another primary feature of his work, particularly notable in the Byzantium Kanon (1986) and Stabat mater (1990), is the influence of sacred music of the Greek Orthodox church. Secular folk music of the same region figures prominently in the oratorio Erotokritos (1982) and other works." Eric Moe in Grove Music Online. (Inventory #: 20047)
$2,750.00 add to cart or Buy Direct from
J. & J. Lubrano Music Antiquarians
Share this item