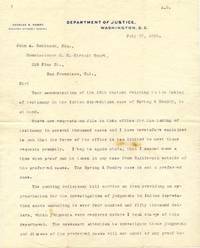 signed
by (CALIFORNIA INDIAN DEPREDATION CASES)
He served as a Mississippi state legislator and assistant attorney general under President Grover Cleveland. Later he was a judge on the United States Court of Claims. TLS. 2pp. 8" x 10". July 27, 1894. Washington, D.C. A typed letter signed "Charles B. Howry" on "Department of Justice" letterhead. It is addressed to "John A. Robinson" of San Francisco, concerning Indian depredation cases: "Your communication of the 19th instant relating to the taking of testimony in the Indian depredation case of Spring & Hendry, is at hand. There are requests on file in this office for the taking of testimony in several thousand cases and I have heretofore explained to you that the force of the office is too limited to meet these requests promptly. I beg to again state, that I cannot name a time when proof can be taken in any case from California outside the preferred cases. The Spring & Hendy case is not a preferred case. The pending deficiency bill carries an item providing an appropriation for the investigation of judgments in the Indian depredation cases amounting to over four hundred and fifty thousand dollars, which judgments were rendered before I took charge of this department. The necessary attention to investigate these judgments and dispose of the preferred cases will not admit of any proof being taken in either cases for some time. To your inquiry if I could not have U.S. Assistance Attorney Dodge take the testimony on behalf of the United States in Indian depredation cases, I have to say, that I can not... ". The letter has a flamboyant autograph and is in fine condition overall. An unusual California letter, showing that not all the Native Americans had been subdued by the 1890s (Inventory #: 388)
$150.00 add to cart Available from
Stuart Lutz, Historic Documents, Inc.
Share this item