Armin LANDECK. The Catalogue Raisonne of His Prints; Second edition, Revised and Enlarged 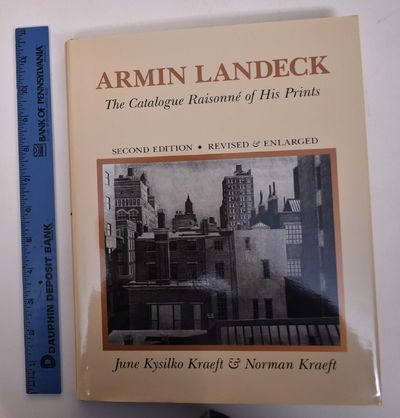 by Kraeft, June Kysilko and Norman Kraeft
Carbondale: Southern Illinois University Press, 1994. Revised and enlarged Second Edition. Hardbound. New. Gilt embossed cloth with illustrated dj. 208 pp. 140+ bw plates. Much expanded from the first edition. Limited to 1200 copies. Catalogue Raisonne. "Armin Landeck, an American realist artist whose graphic career spanned more than half of the twentieth century, was recognized for his brilliance in bringing fresh aesthetic life to the architecture of New York."--BOOK JACKET. "Though his subjects were simple, Landeck's art is moving and powerful. He had been trained as an architect but devoted his life to etching, creating his first print in 1927. A trip to Europe in 1928 inspired a series of thirty-six drypoints and aquatints of European subjects. In the 1930s and early 1940s, Landeck created many drypoints and some lithographs, mostly of New York City but also of rural Connecticut."--BOOK JACKET. "This revised edition of a book first published in 1977 has been completely rewritten and expanded to include prints not known when the first edition was published - plus the prints made by the artist from 1977 till his death in 1984. The first edition contained 127 prints and states; 164 prints and states are now pictured and described."--BOOK JACKET. "An important addition to this book outlines Landeck's participation in many national print exhibitions such as those at the Library of Congress and the Society of American Etchers. Reflecting the growing appreciation of Landeck's work, the first edition's list of public institutions that have Landeck prints in their permanent collections has grown from thirty-one to ninety-six. A new section entitled "Notes on the Prints" gives in-depth information on many Landeck prints. An extensive bibliography is another new feature of this second edition."--BOOK JACKET. (Inventory #: 35970)
$29.99 add to cart or Buy Direct from Mullen Books
Share this item