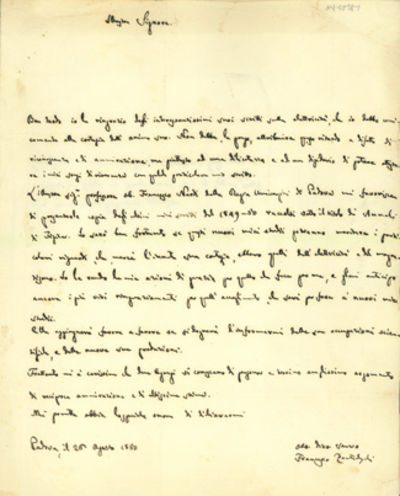 by Zantedeschi, Francesco
1850. Very Good. Zantedeschi, Francesco (1797-1873). A.L.s. to Charles V. Walker (1812-82). Padua, August 25, 1850. 1 page, plus integral address leaf. 265 x 220 mm. Remains of mounting present. Provenance: Latimer Clark. Zantedeschi, a professor of physics at the University of Padua, was largely responsible for transforming the university's physics laboratory from its former mediocre state into one of the best-equipped scientific laboratories of its time. Among the many instruments and apparatus obtained by Zantedeschi for the laboratory was a series of telegraph machines, including an automatic telegraph capable of transmitting images. He wrote a number of works on electricity and magnetism; see Wheeler Gift. His correspondent, Charles V. Walker, had been involved in telegraphy since the 1840s; in 1848 he sent the first submarine telegraph message from a ship connected by two miles of cable to London Bridge, and in 1876 he served as president of the Society of Telegraph Engineers and Electricians. Origins of Cyberspace 215 . (Inventory #: 40787)
$275.00 add to cart or Buy Direct from
Jeremy Norman & Co.
Share this item
Jeremy Norman & Co., Inc.
Offered by