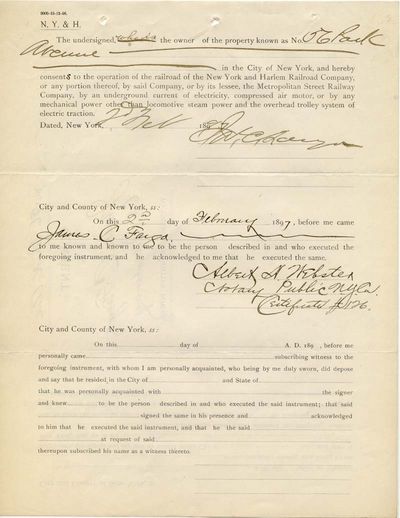 signed
by JAMES FARGO
(1829-1915). Working along with his older brother, William, the co-founder of the American Express Company, James became a prominent figure in the railroad and express industries. He became president of American Express in 1881 upon his brother's retirement from that position. DS. 1pg. 8 ½" x 11". February 2, 1897. New York, NY. A partially printed document signed "Ja. C. Fargo" consenting to the change of a power source at his 56 Park Avenue address in New York City: "The undersigned, who is the owner of the property known as No. 56 Park Avenue in the City of New York, and hereby consents to the operation of the railroad of the New York and Harlem Railroad Company, or any portion thereof, by said Company, or by its lessee, the Metropolitan Street Railway Company, by an underground current of electricity, compressed air motor, or by any mechanical power other than locomotive steam power and the overhead trolley system of electric traction." Today, that address is the home of the American Scandinavian Foundation. The document is in good shape, with light toning at the edges (Inventory #: 1267)
$250.00 add to cart Available from
Stuart Lutz, Historic Documents, Inc.
Share this item