Ford Congratulates The Chairman Of The Commission On Government Procurement: “The Impact Of Government Contracts On The National Economy Is Immense. The Proficiency And Equity With Which Contracting Is Performed Has Much To Do With Whether That Impact Is Constructive Or Destructive” 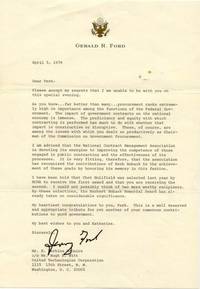 signed
by GERALD FORD
TLS. 1pg. 7 ¼” x 10 ½”. April 5, 1979. No place. A typed letter signed “Jerry Ford” as former President to Perkins McGuire. He communicated on his personal letterhead with a gold eagle at the top: “Please accept my regrets that I am unable to be with you on this special evening. As you know…far better than many…procurement ranks extremely high in importance among the functions of the Federal Government. The impact of government contracts on the national economy is immense. The proficiency and equity with which contracting is performed has much to do with whether that impact is constructive or destructive. These, of course, are among the issues with which you dealt so productively as Chairman of the Commission on Government Procurement. I am advised that the National Contract Management Association is devoting its energies to improving the competence of those engaged in public contracting and the effectiveness of its processes. It is very fitting, therefore, that the association has recognized the contributions of Herb Roback to the achievement of these goals by honoring his memory in this fashion. I have been told that Chet Holifield was selected last year by NCMA to received the first award and that you are receiving the second. I could not possibly think of two more worthy recipients. By these selections, the Herbert Roback Memorial Award has already taken on considerable significance. My heartiest congratulations to you, Perk. This is a well deserved and appropriate tribute for yet another of your numerous contributions to good government.” McGuire, whom the letter is addressed to, served as the Assistant Secretary of Defense under President Eisenhower, and was later appointed by President Nixon to be Chairman of the Commission on Government Procurement. The letter is in fine condition with two mailing folds and a slight stain above the text that affects nothing. (Inventory #: 2260)
$500.00 add to cart Available from
Stuart Lutz, Historic Documents, Inc.
Share this item