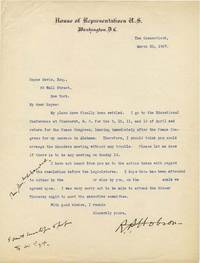 signed
by RICHMOND P. HOBSON
Hobson was an admiral in the United States Navy and a congressman representing Alabama from 1905-1915. Throughout his tenure as a congressman he worked to expand the naval power of the United States. In 1933 he was awarded the Congressional Medal of Honor for his service in the Spanish-American War. TLS. 1pg. 8" x 10 ½". March 20, 1907. Washington D.C. A typed letter signed "R.P. Hobson" addressed to New York lawyer and peace advocate Hayne Davis: "My plans have finally been settled. I go to the Educational Conference at Pinehurst, N.C. for the 9, 10, 11, and 12 of April and return for the Peace Congress, leaving immediately after the Peace Congress for my canvass in Alabama. Therefore, I should think you could arrange the Saunders meeting without any trouble. Please let me know if there is to be any meeting on Sunday 14. I have not heard from you as to the action taken with regard to the resolution before the Legislatures. I hope this has been attended to either by the ____ or else by you, on the _____ scale we agreed upon. I was very sorry not to be able to attend the dinner Thursday night to meet the executive committee." Hobson handwrote some notes on the letter, which is on "House of Representatives" stationery. The National Arbitration and Peace Congress was convened in New York from April 14 to 16, 1907. The conference brought together government officials, intellectuals, and prominent societal figures. The meeting was successful in arousing public interest on the issue of peace and raising questions regarding the position to be taken by United States at the Second Peace Conference held at The Hague, Netherlands in October of that year. The letter has the usual mailing folds and is in fine condition (Inventory #: 1587)
$200.00 add to cart Available from
Stuart Lutz, Historic Documents, Inc.
Share this item