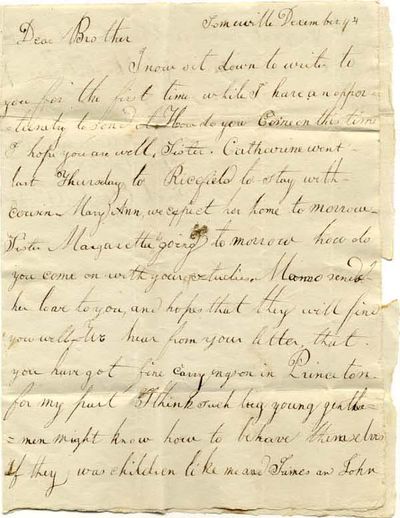 signed
by (PRINCETON UNIVERSITY)
An archive of four letters to Frederick F. Cornell, a student at Princeton. Cornell was the pastor of The Reformed Dutch Church of Manhattan: a) ALS. 4pg. 7 ¾” x 9 ½”. November 8, 1823. No Place. An autograph letter signed “Anna N. Cornell” to Frederick Cornell. In part: “You know I so dearly love to bring an absent friend near—whether by event or thought—or the pleasing medium of expository contact. That your indulgent mind will urge it as an apology for my troubling year at this late hour of the evening. Sister has written to you and nothing particular occurred since you left us, yet I am not willing either of these circumstances should thwart my design or rob me of this interview. The heart, my dear F., receives and entertains those we love and amidst its overflowing, the pen need not rest on casual incidents to give it utterance.” The letter is in very good shape, with fold separations that do not affect legibility. b) ALS. 2pg. 7 ¾” x 12”. December 24, 1824. No Place. An autograph letter signed “N.P. Cornell” to Frederick Cornell. In part: “I have been waiting these two days for energy and vivacity enough to write to you and still you must take me as the same dull creature as ever. I had meant before this you should have learnt the particulars of the late nuptials celebrated near us. Papa had the honor on Monday evening of writing Miss Martina … (now Mrs. Condit) to a congressman…Sister, Mr. Denian, and myself were also invited. Had an unusually pleasant wedding, save the Dr. Len, the later graduate whom you know, and were introduced to his sister, Miss Anne Condit, the flame of Mr. Henry. The bride and groom went to Morristown the next morning.” The letter is in very good shape, with toning and tattering. c) ALS. 2pg. 7 ¾” x 9 ½”. May 25, 1825. No Place. An autograph letter signed “Brother F.” to Frederick F. Cornell. In part: “Shall I commence your epistle with … upon the late manifestation of your affection or in other words acknowledge with gratitude the receipt of your letters. I often pause to inquire what are the traits of my own character. I find that acts of affection in my friends, draws back every later principle of love into the liveliest species which on the contrary, a cool, distant, reserved demeanor in those…friends high or low frees my soul to adamant.” The addressee’s sister takes over the next part of the letter: “This is your sister…Accept my thanks again for your last letter. Write whenever your pursuits will permit. Letter writing possesses advantages that few suitably prize or are sensible of. It helps attain kindred attachments. It gives a flow to thought, an ease to …, a grace to style. It gives durability to thought. It convinces friends of their remembrance in the mind and it informs of the welfare of those we love. Write my brother, write to me.” The letter is in good shape, with one fold separation. d) ALS. 2pg. 6 ¼” x 8”. December 4 [no year]. Somerville. An autograph letter signed “Sarah Elizabeth Cornell” to Frederick Cornell. In part: “I now sit down to write to you for the first time while I have an opportunity to send it. How do you come on this time. I hope you are well. Sister Catherine went last Thursday to Ricefield to stay with cousin Mary Ann. We expect her home tomorrow. Sister Margaret is going tomorrow. How do you come on with your studies. Mama sends her love to you and hopes that they will find you well. We hear from your letter that you have got fine carryings-on in Princeton.” The letter is in fair shape and legible, with a few ink smears. (Inventory #: 2413)
$150.00 add to cart Available from
Stuart Lutz, Historic Documents, Inc.
Share this item