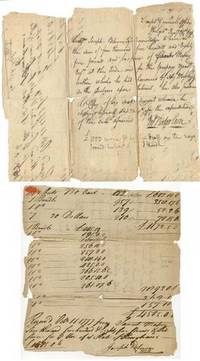 signed
by JOHN NICHOLSON
Nicholson was a Revolutionary-era Pennsylvania state official. He partnered with Robert Morris in western land speculation that bankrupted both. He was sent to debtor's prison in 1800 and died there shortly thereafter. ADS. 1pg. 8 ¾" x 8. Jany 21, 1783. Comptr Generals Office Phiada. A very rare autograph document signed "Jno Nicholson": "Capt Joseph Blewer Esqr acknowledges to have recd the sum of four thousand five hundred and eighty five pounds and Six pence of Samuel Massey Esqr. at the time and for the purpose Mentd. within which he had borrowed of Sd. Massey as, he declares upon Interest, he also produces a copy of his accts. Current wherein he charges himself and accts. for the expenditure of the sum aforesaid... £1000 were pd by his draft on the navy board in fav of I Hood." On the back are numbers totaling £4585.6 all in the handwriting of Joseph Blewer. At the bottom, Blewer penned "Receiv'd Octr 18 1777 from Samuel Massey Four Thousand five hundred & eighty five pounds & Six Pence for the use of the State of Pennsylvania. Joseph Blewer". Joseph Blewer of Philadelphia served in the Pennsylvania General Assembly from 1779 to 1780. Samuel Massey (1734-1793), a descendant of a prominent Quaker family in the Philadelphia region, was a captain in the Revolution and commanded a company of troops. Before the war, he owned a successful import company. As this document shows, Massey indirectly lent Pennsylvania money for the war efforts. Though Nicholson is a common autograph appearing on many pieces of Revolutionary War paper, the American Book Prices Current shows only two holograph pieces. The document is in fragile condition with fold separations and ragged edges (Inventory #: 1358)
$750.00 add to cart Available from
Stuart Lutz, Historic Documents, Inc.
Share this item