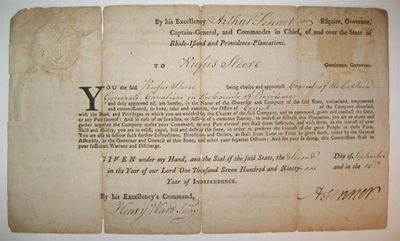 signed
by ARTHUR FENNER
ARTHUR FENNER (1745-1805). Fenner served as Rhode Island Governor from 1790 to 1805, dying in office. It was during his administration that Rhode Island became the last of the thirteen states to ratify the Constitution, which barely got the amount of votes required. He was fervently Ant-federalist, being one of the foremost leaders in the Country Party. His son James was elected governor of Rhode Island just two years after Fenner died. HENRY WARD (1732-1797). Ward, a Rhode Island politician, first made a name for himself by attending the Stamp Act Congress in 1765. He served in the state government throughout the Revolution, and was a great supporter of the new Constitution in the stodgy state of Rhode Island, which opposed the new centralized government. DS. 1pg. 12 ¼” x 7 ¼”. September 2, 1791. Rhode Island. A partly-printed document signed “A. Fenner” and “Henry Ward” appointing Rufus Steele to a lowly military position: “You the said Rufus Steele being chosen and appointed Cornet of the Captain General’s Cavaliers in the County of Providence and duly approved of, are hereby, in the name of the Governor and Company of the said State, authorized, empowered and commissioned to have, take and exercise, the Office of Cornet of the Company aforesaid, with the Rank and Privileges to which you are entitled by the Charter of the said Company, and to command, guide, and conduct the same, or any Part thereof: And in case of an Invasion, or assault of a common Enemy, to molest or disturb this Plantation, you are to alarm and gather together the Company under your Command, or any Part thereof you shall deem sufficient, and with them, to the utmost of your Skill and Ability, you are to resist, expel, kill and destroy the same, in order to preserve the Interest of the good People in these Parts. You are also to follow such further Instructions, Directions and Orders, as shall from Time to Time be given forth, either by the General Assembly, or the Governor and council of this State, and other your Superior Officers: And for your so doing, this Commission shall be your sufficient Warrant and Discharge. Given under my Hand, and the Seal of the said State, the Second Day of September in the Year of our Lord One Thousand Seven Hundred and Ninety-One and in the 16th Year of Independence.” The document is in very good condition, with staining, toning, tattering, and some fold separations. (Inventory #: 2119)
$400.00 add to cart Available from
Stuart Lutz, Historic Documents, Inc.
Share this item