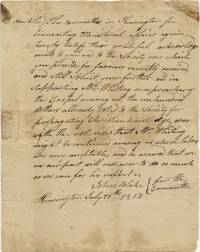 signed
by (MISSIONARIES)
1pg. 6" x 7 ½". July 20, 1818. Kensington [probably Connecticut]. An autograph letter signed "John Blake" as president of the Society for Propagating Christian Knowledge, to Reverend Eliphalet Pearson (1752-1826), a Harvard professor who began the theological seminary at Andover Academy: "The committee in Kensington for travailing Ministerial affairs again hereby testify their grateful acknowledgements to you and to the Society over which you preside for favours recently received, and still solicit your further aid in supporting Mr. [Minister Samuel] Whiting as a preacher of the Gospel among us, the one hundred dollars already voted to the Society for Propagating Christian Knowledge, was with the sole view that Mr. Whiting might be continued among us, whose labors are very acceptable, and be assured that we on our part will endeavor to do as much as we can for his support." The Society for Propagating Christian Knowledge was a Scottish organization whose mission was to Christianize Native Americans. The letter is clearly legible, with a few spots of toning (Inventory #: 1505)
$300.00 add to cart Available from
Stuart Lutz, Historic Documents, Inc.
Share this item