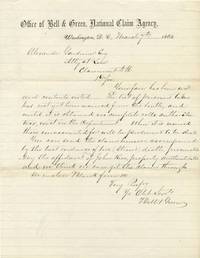 by (CIVIL WAR)
L. 1pg. 7 ½” x 9 ¾”. March 7, 1862. Washington, D.C. A letter from the Bell and Green National Claim Office about missing Civil War soldiers. The company wrote on their letterhead to Alexander Gardiner of Claremont, New Hampshire: “…The list of prisoners taken has not yet been received from the South, and until it is obtained no complete rolls authoritative exist in the Department. When it is received those unaccounted for will be presumed to be dead. You can send the claim however, accompanied by the best evidence of his (Straw’s) death, procurable say the affidavit of John Rice, properly authenticated and we think we can get the claim through.” The letter is in fine condition. It appears that the recipient of the letter, Alexander Gardiner, was killed a few months later at Winchester. The condition is very fine with the usual mailing folds. (Inventory #: 2224)
$150.00 add to cart Available from
Stuart Lutz, Historic Documents, Inc.
Share this item