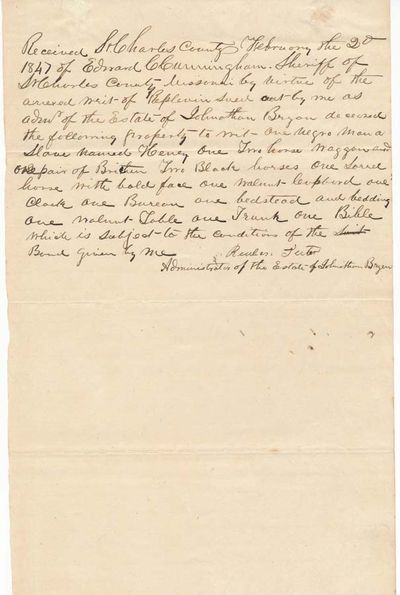 signed
by (SLAVERY -- WRIT OF REPLEVIN -- ST. CHARLES, MISSOURI). TUTER, Reuben (?-?)
Confidant of Missouri pioneer Jonathan Bryan (1759-1846) of the noted St. Charles family whose relatives included their neighbor Daniel Boone. DS, 1p, 7½" X 12", St. Charles County, MO, 1847 February 2. Near fine. Acknowledgment that Tuter, who signs himself as "Administrator of the Estate of Johnathan Bryan," has had a writ of replevin made out and issued to the St. Charles sheriff, Edward C. Cunningham (1809-65), for delivery to an unnamed offender. The writ seeks to recover the following property apparently wrongfully taken from Jonathan Bryan's estate: "one negro man a Slave named Heney one Two horse waggon and one pair of Briches Two Black horses one Lorrel horse with bold face one walnut Cupboard one clock one Bureau one bedstead and bedding one walnut Table one Trunk one Bible...." In other words, everything but the kitchen sink. Signed at the conclusion by Tater (in his definitely untutored hand). Tales of slaves are found in the Bryan family lore, such as: "Mrs. Jonathan Bryan, a kinswoman of Daniel Boone, was working in her yard with a slave woman when a boy slave screamed. She saw an Indian warrior heading for them with a tomahawk in one hand, and a gun in the other. The women ran for the house. Just as they were slamming the door, they caught the warrior's head and right arm between the door and facing. The slave woman grabbed the hatchet from his hand and killed him with a sharp blow. The women had barely recovered from their fright when the boy shouted again...." Could the slave boy in this old family legend by none less than the "Slave named Heney" whose return is demanded in this replevin suit? Quite unusual slavery item with an intriguing history. (Inventory #: 28345)
$795.00 add to cart or Buy Direct from
Main Street Fine Books & Mss.
Share this item

New York : Harcourt, Brace & Company , 1936
(click for more details about The People, Yes)
View all from this seller>