A Shade of Paden 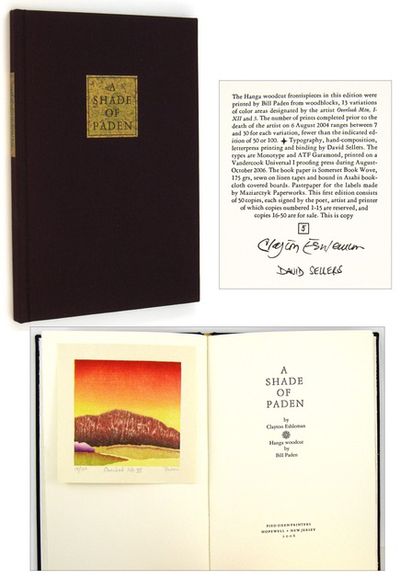 by ESHLEMAN, Clayton
Hopewell: Pied Oxen Printers. 2006. A long poem by Eshleman in memory of his longtime friend, the artist Bill Paden, who died in 2004. Of a total edition of 50 copies, this is one of 15 numbered copies reserved for the poet and for the printer, David Sellers. Signed by Eshleman and Sellers. With a Hanga woodcut frontispiece signed by Bill Paden and numbered as one of 100 copies but, according to the colophon, no more than 30 were completed before Paden's death. A fine copy, from the library of author Clayton Eshleman. Letter of provenance available. Unless otherwise noted, our first editions are first printings. First Edition. Hardcover. Fine. (Inventory #: 027889)
$1,000.00 add to cart Available from
Ken Lopez - Bookseller
Share this item