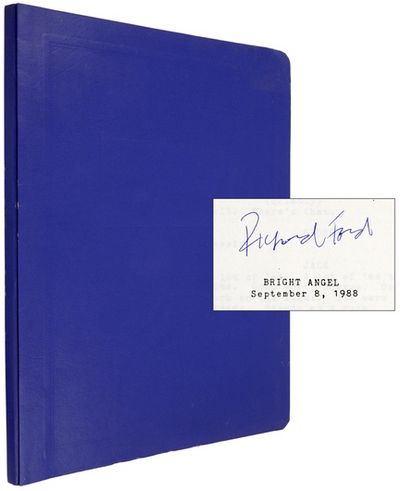 by FORD, Richard
(n.p.): (n.p.). 1988. A 120-page screenplay by Ford for a 1991 film adaptation he did from stories in his collection Rock Springs. Signed by Ford. An unknown number of copies were produced; Ford signed seven of them at a reading in 1990. Photo-reproduced sheets on 3-hole paper. In this copy, page 120 was typed on a different typewriter than the first 119 pages. A fine copy, bound in a flexible blue binder. The film was directed by Michael Fields and starred Dermot Mulroney, Lili Taylor, Sam Shepard and Valerie Perrine. Unless otherwise noted, our first editions are first printings. First Edition. No Binding. Fine. (Inventory #: 911202)
$1,000.00 add to cart Available from
Ken Lopez - Bookseller
Share this item