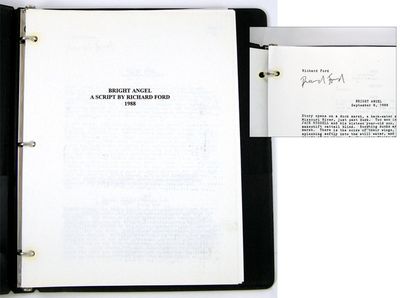 by FORD, Richard
(n.p.): (n.p.). 1988. A 120-page screenplay by Ford for a 1991 film adaptation he did from stories in his collection Rock Springs. The film was directed by Michael Fields and starred Dermot Mulroney, Lili Taylor, Sam Shepard and Valerie Perrine. Apparently a later generation photocopy, as the text is less sharp; also the rectos of the pages tend to stick to the versos of the pages preceding. This copy is signed by the author. Near fine, in maroon binder. Unless otherwise noted, our first editions are first printings. First Edition. Softcover. Near Fine. (Inventory #: 911203)
$1,000.00 add to cart Available from
Ken Lopez - Bookseller
Share this item