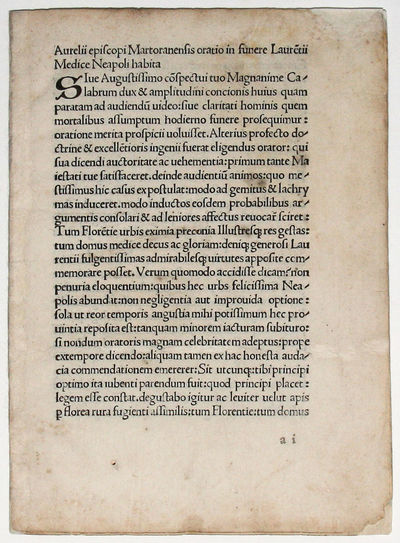 Rare, first edition of this funeral oration for Lorenzo de Medici, read in Santa Maria Nuova on 16 April 1492, evidently the only contemporary printed oration of the many delivered and printed in his honor to survive.
"Lorenzo de' Medici… (born January 1, 1449, Florence [Italy]—died April 9, 1492, Careggi, near Florence), Florentine statesman, ruler, and patron of arts and letters, was the most brilliant of the Medici. He ruled Florence with his younger brother, Giuliano (1453–78), from 1469 to 1478 and, after the latter's assassination, was sole ruler from 1478 to 1492." (Brittanica.com)
The present publication is the sole oration devoted to Lorenzo in the Short-Title List of Funeral Orations from the Italian Renaissance, Ca. 1374-1534 compiled by John McManamon, and the only printed example featured in the 1992 exhibition at the Bibliotheca Nazionale Centrale, Lorenzo dopo Lorenzo La Fortuna Storica di Lorenzo il Magnifico. Notwithstanding the poor survival rate of ephemeral publications and the controversial character of the laudandus, the statistic remains remarkable. The motive for the present oration was overwhelmingly political and meant to insure continuation of the traditionally strong alliance between Naples and Florence at a difficult time of dynastic transition. According to Miglio (DBI X.369-70), the work was published before it was read.
A Naples edition was published the same year from the press of Cristannus Preller (IGI VI.1722-A). The work was re-published in the 19th century by Vito Capialbi in Memorie di R. Zeno e A. Bienato (Naples 1838) 49-86. Milanese born, Aurelio Bienato was Reader in Rhetoric at the University of Naples (1470-80), and later elected Bishop of Martirano (modern Catanzaro), in which sinecure he remained until his death. Miglio also lists an unpublished commentary on Quintilian (Iter Italicum I.415-16, II.570), and a collection of Latin verses, Elegantiarum epithomata, an epitome of Lorenzo Valla's Elegantiae linguae latinae, which went through a number of incunable editions (1479/80; 1488; 1491).
US copies (ISTC): Huntington, Newberry and Yale.
Provenance: Ritman copy.*Goff B-667; BMC vi.784; GW IV.1346; Paolo Pira ed., Lorenzo dopo Lorenzo. La Fortuna Storica di Lorenzo il Magnifico (Florence, Biblioteca Nazionale, 1992), I.24); John M. McManamon, Funeral Oratory and the Cultural Ideals of Italian Humanism (1989), p. 256 & 41-43. (Inventory #: 2680)
$12,500.00 add to cart Available from Martayan Lan
Share this item
Martayan Lan, Inc.
Offered by