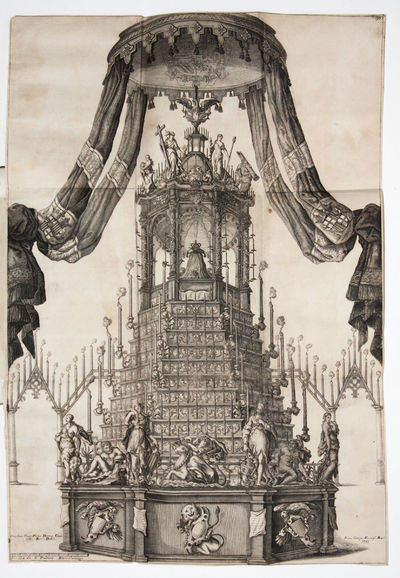 by [FÊTES] / ROCABERTI, Joseph
Barcelona: Juan Pablo Marti for Francisco Barnola, 1701. Scarce first edition of this curious funeral fête for Carlos II, generally regarded by posterity as the most stupid and ineffective of the Hapsburg kings of Spain, whose reign (1665-1700) saw the utter dismemberment of the kingdom by Louis XIV. Needless to say, this is not how he is regarded in this account of the funeral proceedings by the Jesuit Rocaberti, which in addition to the standard description of the public ceremonies and the unusually large catafalque (pictured), contains one feature we have never encountered in a funeral publication: some of the orations, laments, hymns and other literary texts are arrayed in calligrams, labyrinths and other graphically striking configurations. For example, the text of a Latin distich Mors rapuit Carolum (Death has snatched Charles) has been scrambled in a diamond-shaped pattern. * Palau 271,658; De Backer Sommervogel VI.1928.1.. 4to. [19.8 x 14.5 cm], (12) ff., 272 pp., (14) ff., 8 folding plates (that of the catafalque oversized & signed Francisco Gazan after Jos. Vives), and 1 printed in red and black. Bound in contemporary flexible vellum, title stenciled on spine in a neat hand. Ownership inscription of Juan Ant. de Figueras on front end leaf; some foxing and small, light waterstain on title and in upper margin of scattered leaves; some repairs to blank upper margin of approximately 15 leaves. Otherwise good. (Inventory #: 1712)
$2,650.00 add to cart Available from Martayan Lan
Share this item
Martayan Lan, Inc.
Offered by