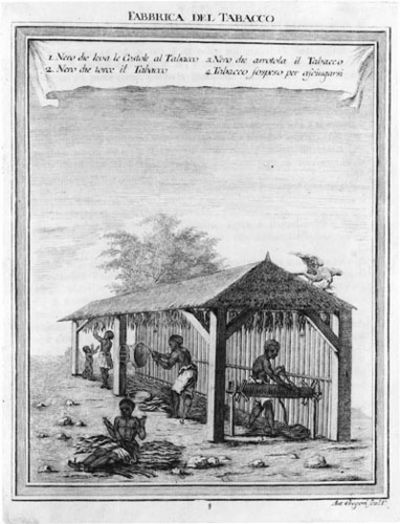 by [Gazzettiere Americano]
Livorno: Marco Coltellini, 1763. First Italian edition of this comprehensive geographical dictionary of the New World. This translation of the American Gazetteer [3 vols., London, 1762], is practically a new work, having been greatly enlarged, and with eighty plates and maps engraved for this edition (Borba, p. 347). In the Italian editors introduction, he explains that Americas growing importance in French and English affairs had produced a need for a general text on the continent, suitable for curious amateurs. Of non-Iberian Europe, Italy probably had the longest tradition of travel literature. It was therefore natural for the Italian public to be avidly interested in the new discoveries, even though... these discoveries did not directly concern the Italians (Penrose, p. 304). Of Cuban interest: vol. I contains 4 text pages (pp. 140-44) and a folding map of the islands; vol. II contains 5 text pages and a plan of the port of Havana. Naturally Cuba also appears in the volumes regional maps. The Gazzettiere focuses on the current state of affairscommerce, the arts, and European political influencesas opposed to the history of discovery. As much as it purports to cover all areas of the New World, an English bias is evident; there are extensive articles devoted to the New England area, particularly Boston, the pre-eminent city of the British Empire in America (vol. I, p. 42). A 5-page entry on Brazil appears in the first volume, featuring engravings of a toucan and a monkey. Also included is a map of Condamines 1743 expedition down the AmazonThe majority of the 21 maps contained in the Gazzettiere were based on those of Emanuel Bowen (1714-67), Royal Geographer of George II and Louis XV. * Sabin 26814; Howes, A 207; Borba, p. 347, faulty collation.. Folio. 3 vol. (3) ff. incl. engr. frontis. and title, xxiii, (1), 216 pp, (1) ff.; 256 pp.; 253 pp. (1) ff. 78 maps and plates. Most likely a married set, with vol. 1 in contemporary vellum, lower edge of front cover exposed to pasteboard; remaining vols. in somewhat later vellum, with spines partially rebacked; 19th-century ownership inscription (G. Traccalossi) on verso of frontis., library stamp on half-title and frontis. Light finger soiling, repair to first map, occasional staining but generally good. (Inventory #: 2405)
$4,500.00 add to cart Available from Martayan Lan
Share this item
Martayan Lan, Inc.
Offered by