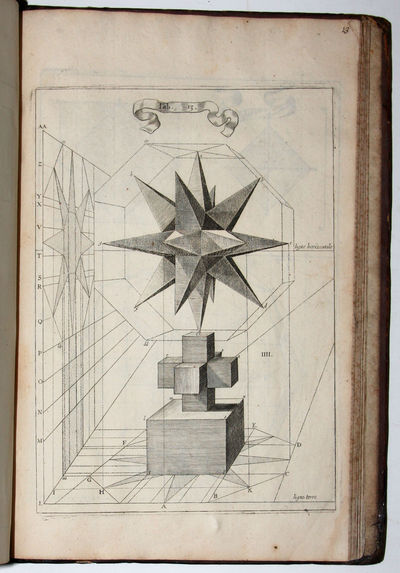 by NICERON, Jean François / MERSENNE, Marin
Paris: Jean du Puis/Widow of Langlois, 1663. Scarce edition of this important treatise on perspective by the most scientifically rigorous of 17th-century French theorists, of particular interest for its contention that “the illustrations to earlier treatises were often defective” (Millard), thus making it the first work on the subject to treat the problem of didactic illustration in a deliberate and self-conscious manner. A comprehensive textbook, Book I gives basic geometrical definitions and an introduction to perspective construction; Book II treats simple and deformed perspectiveŌĆönamely, the curved or irregular surfaces found in vaulted ceilings, niches etc., and examines the necessary surface distortion (anamorphosis) to bring a picture painted on such a surface into perspective; Book III deals with more complex cases of anamorphosis, such as reflections on flat, cylindrical and conical surfaces; and Book IV covers the use of dioptrics for placing figures on flat surfaces. The sections of books II and III dealing with anamorphosis were particularly important, whether in Niceron’s own practice as a painter or for later artists or theorists (see the chapter on Niceron in Baltrušaitis), and according to Mahoney (DSB), the discussion of refraction in Book IV possibly contains “the first published reference to Descartes’ derivation of the law of refraction” (X.104). The work first appeared in French in 1638; reprinted in 1646 and 1651, in the latter with the first appearance of Mersenne’s treatise. This edition is a second edition of that reprint. * Millard French, 124 (1663); Wiebenson III.b.18; Kemp, The Science of Art, pp. 129ff.; Baltrušaitis, Anamorphosis, 51ff.. Folio [35 x 22.5 cm], engraved frontispiece signed Daret, (6) ff., including half-title and title, engraved portrait of Niceron signed M. Lasne, 191 (1) pp., with 7 woodcut diagrams in text and 50 numbered plates [49 full-page, 1 double page]; (6) ff., 134 pp. Note: plates bound at back. Bound in contemporary calf, covers ruled, spine with raised bands elaborately gilt; covers abraded and some small chips to spine on bands; former ownership stamp on verso of title; spotting and even toning or light browning on scattered leaves often seen in this work; wormhole in margin of plates 27 and following repaired extending into printed surface (generally only printed border). Otherwise very good. (Inventory #: 1752)
$7,500.00 add to cart Available from Martayan Lan
Share this item
Martayan Lan, Inc.
Offered by