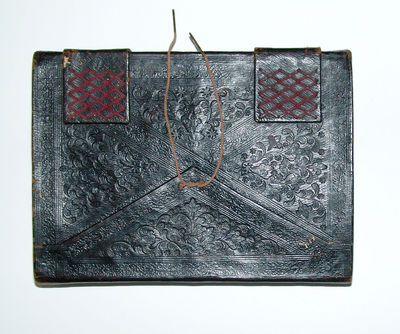 by [WALLET BINDING / BUSINESS / SPINOLA FAMILY]
n.p., 1619. Early 17th-century account ledger of Giulio Cesare and Luco Spinola, two brothers of the Genoese patrician family, recording debts and credits over a period beginning in 1619 and ending in 1631. Information about individual debts is registered at the top of each page, with ample blank space underneath for successive transactions relating to the debt. Other pages are filled with tables recording transactions in a given period of time pertaining to different debtors and creditors. Although the book was evidently begun in 1619, some of the entries record transactions dating back to 1599. The entries are written in a single neat hand which only occasionally turns into a hasty scrawl. Six loose leaves inserted into the pages contain records of transactions from 1599 to 1630. The brothers were evidently responsible for the finances of their mother, Lamilla, whose name appears frequently, as well as their sisters. One of them, Luiggia, born Livia, was in a convent, while the other, Benedetta, had her dowry managed by her brother until her marriage to her cousin, Paris Salvago. Reflecting the Spinola family’s twin spheres of influence in Genoa and Naples, both places appear in the transactions, with somewhat more mentions of Naplesâ€”probably an indication of the focus of Giulio Cesare and Luco’s business interests, and a plausible explanation for why their accounting ledger should be bound in such a splendid Spanish-Neapolitan binding.. Folio manuscript, [25 x 35 cm], consisting of 119 numbered leaves and (70) blank leaves; (6) loose folded leaves. Contemporary black morocco wallet binding, most likely Neapolitan (or Spanish), elaborately and densely tooled, with original morocco reinforcements with decorative red stitching on lower edge (i.e., spine); some minor worming and abrasion. Vellum title shows minor soiling, and so do extremities of scattered leaves, but generally in an excellent state of preservation. (Inventory #: 2607)
$6,500.00 add to cart Available from Martayan Lan
Share this item
Martayan Lan, Inc.
Offered by