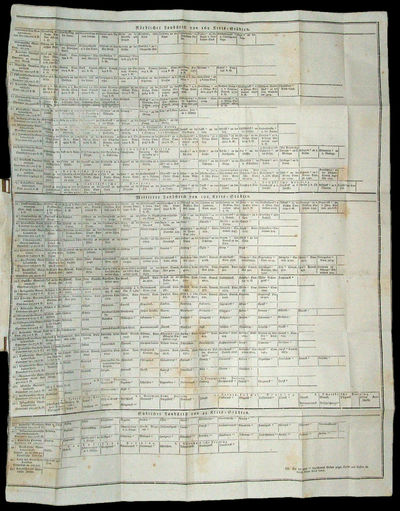 Very rare first edition of this geographical and social encyclopedia of Russia, published the year of Catherine the Great's death: it is one of the earliest foreign-language reference works on the country we have seen. In a thousand pages Heym covers the cities, towns and administrative districts of Russia, its rivers and mountains, industries, trade routes and agricultural products, cultural institutions, schools, and places of worship—plus assorted facts such as population statistics, university tuition fees, institutional endowments, the cost of running urban poorhouses, agricultural methods, and the quality of local drinking water. Heym's pride in Moscow University (where he taught German and eventually became rector) is reflected in a detailed account of the university's history, faculty, facilities, and student population (e.g., "The anatomical theater is very roomy and has a particularly rich collection of miscarriages of all sorts," p. 506).
Heym (1759-1821) moved to Moscow in 1779 and initially taught German at Moscow University, publishing several German-Russian dictionaries and grammars. In the Introduction he explains that he had planned to translate a Russian encyclopedia into German, but found the work so riddled with errors that he decided to compile an original work based on a wide range of sources.
The digital version of the Heym is of the printed text, but incomplete, without the folding chart. The large folding chart ( 24 " x 18 1/2") – often missing- is a census of 44 different regions of the Russian Empire, divided in North, South and Central territories and lists over 400 towns and cities with their population, some with as low as 200 others more that 400,000 inhabitants. This is an interesting and comprehensive document which makes comparisons possible.
2 US copies: Harvard and Indiana (none of which mentioning the folding plate, present in our copy).
*SWB record, Bayrische Staatsbibliothek record, Hollis record; Catalogue des Russica H 792. (Inventory #: 4059)
$3,450.00 add to cart Available from Martayan Lan
Share this item
Martayan Lan, Inc.
Offered by