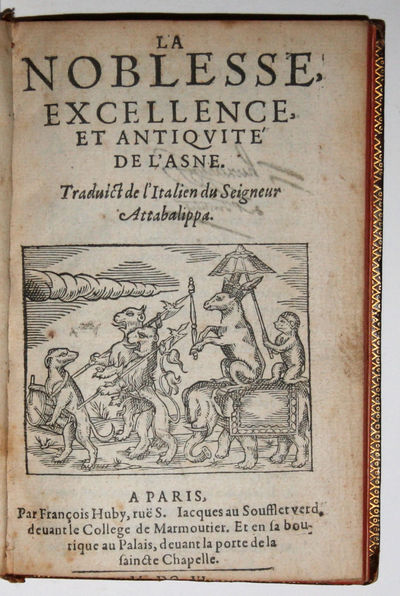 by BANCHIERI, Adriano
Paris: François Huby, 1606. Extremely rare first and only French edition (first Italian: 1592) of this satirical work on the nobility of the ass by one of the major musical theorists of the early Baroque. This is the earliest extant work and by far the most successful by Banchieri (1568-1634). The work ran into several Italian editions as well as translations into English and German, and spawned imitations such as Giulio Cesare Croce’s panegyrics on the pig and the ox.A member of the Accademia dei Floridi (later Filomusi) of Bologna, Banchieri took delight in turning received wisdom on its head and using traditional methods of learned discourse to prove paradoxes. In that sense his Noblenesse of the Ass (and its follow-up work, La nobilissima, anzi asinissima compagnia, Bologna, 1597) are part of the same tradition of satirical literature as Erasmus’ In Praise of Folly and Agrippa’s De incertitudine et vanitate scientiarum, which ends with a chapter in praise of asses to which Banchieri refers—although obliquely, since Agrippa’s works had been placed on the Index. However, Banchieri is clearly a child of the Counter Reformation, rejecting the use of Bible passages for satirical purposes. This edition not in OCLC, not in BL. No other French edition in OCLC or at BNF.*Wernli, Studien zum literarischen und musikalischen Werk Adriano Banchieris (1568-1634), 1981.. 53, (1) ff. Bound in 18th-century calf, raised bands and morocco title label on gilt-tooled spine, corners a little worn, some soiling and dampstaining on outer leaves, title a little closely cropped with partial loss to date of imprint, old inscriptions in ink on fly leaf and verso of title, light toning throughout, else very good. (Inventory #: 4002)
$2,450.00 add to cart Available from Martayan Lan
Share this item
Martayan Lan, Inc.
Offered by