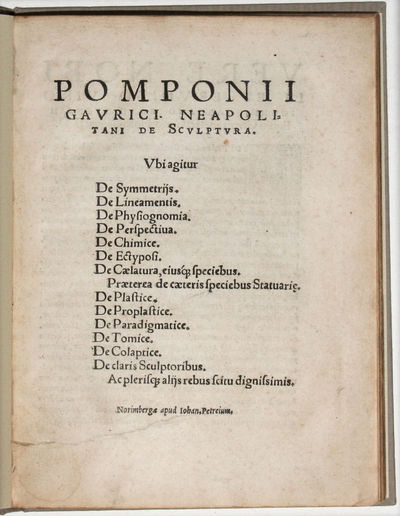 by GAURICO, Pomponio
Nuremberg: Johannes Petreius, 1542. * Vagnetti EIIb1; Schlosser-Magnino, pp. 235-239; Kemp, Science of Art, pp. 40-41; modern ed. by A. Chastel & R. Klein (1969).. Rare early edition of this famous work on sculpture, perspective and the aesthetic theory of the plastic arts, of particular importance for the diffusion of perspective theory north of Florence. Kemp characterizes the work’s technical innovations as "a curious mélange of the Albertian method, using an intersecting plane (the central vertical), and the ‘workshop’ method which depends on the diagonal point(s)" (Science of Art, p. 42, and following for Gaurico’s foreshortening method). Midway between Alberti and Vasari, Gaurico’s treatise also documents the tremendous increase in cultural prestige which painting underwent during the fifteenth century: the incomparable outpouring of masterpieces of that century stilled the old debates about the dignity of painting and its status as one of the liberal arts. This prestige is here reflected in art criticism as a broad discipline in accord with a humanistic concept of culture, with its emphasis on history and informed evaluative judgement. The work first appeared in 1504 (Florence), and again in 1528 (Antwerp); it proved particularly popular in German-speaking countries, as this imprint from the home of Dürer attests. All early editions are quite rare. The work became an instant "classic" in aesthetics and was often anthologized into the 17th century.Pomponio Gaurico (1482-1530) was a professor of philology at the University of Naples, a poet and humanist par excellence. His brother Luca was a celebrated mathematician, and made an influential Latin translation of Peckham’s treatise on perspective. (Inventory #: 294)
$3,850.00 add to cart Available from Martayan Lan
Share this item
Martayan Lan, Inc.
Offered by