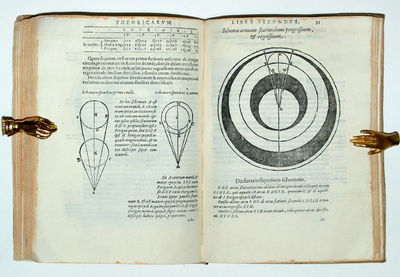 by MAGINI, Giovanni Antonio
Venice: Damiano Zenario, 1589. * Adams M-119; Riccardi I.2.65.5; Luigi Campedelli in DSB IX.12-13; Gingerich, “Science in the Age of Copernicus,” Harvard Library Bulletin XXVI, no. 4 (1978), no. 42; Thorndike VI.56-9.. First edition of New Theories of the Celestial Orbs Agreeing with the Observations of Copernicus, Magini’s principal astronomical treatise. The work is of interest for the 16th-century reception of Copernicus, whom Magini admired; and although he endorsed the unprecedented accuracy of Copernicus’s calculation of celestial movements he nevertheless publicly retained his belief in geocentrism. His private correspondence, however, leaves no doubt that Magini became a “closet” Copernican (see above). Even so, Magini represents a progressive case of 16th-century “establishment” science, and whether explicitly or not, and whether fairly or not, he is the target in much of Galileo’s more revolutionary embrace of the Copernican system. In this work Magini “took the position that Copernicus had so reformed astronomy that no correction of equal motions, or a very slight one, was now required... For although Copernicus had devised hypotheses which wandered far from verisimilitude, yet they corresponded closely to the phenomena... He, therefore, collated the ideas of Ptolemy and Copernicus, adding new hypotheses of his own where they seemed necessary, and has written an introductory text or theory of the planets along these lines. He asserts that there was a great demand for such a theory of the planets which would abandon the outmoded Alfonsine hypotheses and conform his recent observations without such absurd hypotheses as Copernicus had imagined” (Thorndike VI.56).At the time of the present work, Magini (1555-1617) held one of the two chairs of mathematics at Bologna, to which he had been elected over the young Galileo. This undeserved preference naturally aggravated the already advanced rivalry between the two. Magini was a talented calculator, producing the best ephemerides of his day, and was an accomplished geographer and cartographer. (Inventory #: 3477)
$11,500.00 add to cart Available from Martayan Lan
Share this item
Martayan Lan, Inc.
Offered by