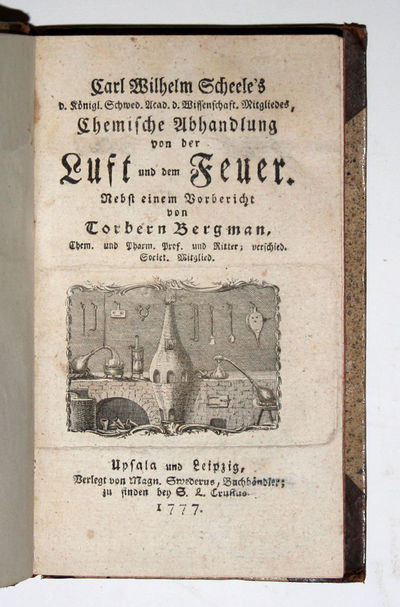 by SCHEELE, Carl Wilhelm
Upsala & Leipzig: Magn. Swederus... zu finden bey S.L. Crusius, 1777. First edition of this extremely scarce and important book which contains the announcement of Scheeles discovery of oxygen, made independently of, and two years prior to, Priestley. Scheeles monumental discovery was made by 1773; he had begun his experiments on oxygen in 1770. The publication of this book was delayed due to the fact that Tobern Bergman was two years late in delivering his promised preface. The work is fittingly bound with Bergmans own lectures on the nature and application of chemistry, a rare work that is not included in his collected works Opuscula Physica et Chemica.The independent discovery of oxygen is here described and the composition of air by two gases is illustrated. One of these is necessary for combustion and respiration and it is absorbed by a number of solid substances and can be artificially produced; the second gas (nitrogen) prevents combustion. Scheeles fire-air (oxygen) could be produced from saltpetre, from black oxide of manganese, from oxide of mercury, etc. The photo-sensitive nature of chloride of silver was announced, a discovery that led to photography (Dibner, Heralds of Science, 41). Scheele (1742-1786) was an experimental genius; he made more discoveries of first-rate importance with fewer opportunities and scantier appliances than any one else, and his skill, insight and power of illuminating experimental results have never been surpassed, if indeed, they have ever been equaled (Ferguson II.331).Bergman (1735-1784) was a member of the Swedish Academy and from 1767 professor of chemistry at Uppsala. He had a high regard for the younger Scheele and did everything in his power to bring him to the notice of the scientific world. Bergman owed to him his transition from obscurity to a leading position in the world of science. (Partington, III, p. 208) His Essay on the General Usefulness of Chemistry and its Application to the Various Occasions of Life (thus the title of the English edition of 1783) gives a general view [of] medical, oeconomical, and technical chemistry, halurgy, geurgy, theiurgy, salts, earths, inflammable substances, metals, waters and airs. (Partington III, p. 184) Bergman remained a follower of the phlogiston theory all his life.OCLC: Scheele: Burndy, Chemical Heritage Foundation, Cornell, Madison, NLM, Smithsonian, Stanford, UCLA, Yale. Bergmann: Cornell.* Scheele: DSB XII.143-50; Horblit 92; Partington III.205-34; Waller 11225; Gernsheim, Hist. of Photography (1969), pp. 32-33; not in Duveen, Ferguson, Young, or E.F. Smith collections.*Bergmann: Partington III, p. 184, F.. 8vo, 3 ff., 16, 155, (1) pp. Engraved vignette on title & one folding engraved plate, both depicting chemical apparatus. Bound with:BERGMANN, Torbern. Anleitung zu Vorlesungen über die Beschaffenheit und den Nutzen der Chemie, und die allgemeinsten Verschiedenheiten natürlicher Körper. Aus d. Schwedischen übersetzt. Stockholm and Leipzig, Swederus. 1779. 8vo, 95, (3 blank) pp. Niedersächsische Staats- und Universitätsbibliothek and Berlin records call for xxxi preliminary pages as well as 95 numbered pages. Utrecht, Union Catalog Hesse, Bayrische Staatsbibliothek Munich records match our collation. (Inventory #: 3891)
$18,000.00 add to cart Available from Martayan Lan
Share this item
Martayan Lan, Inc.
Offered by