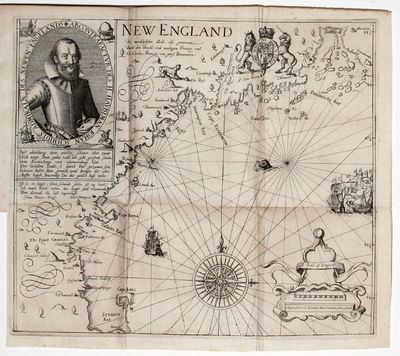 by SMITH, John
Frankfurt: In verlegung der Hulsischen, 1617. * Church 304; Sabin 33,667 (and 82,819n); JCB I.492 no. 569; Alden-Landis II.617/137; Brunet III.370; Bibliotheca Grenvilliana I.352; Asher, p. 72; Association for the Preservation of Virginia Antiquities, "Captain John Smith," http://www.apva.org/history/jsmith.html (1997/2000).. Rare first edition of the fourteenth part of Hulsius’s voyage anthology, a translation into German of Captain John Smith’s Description of New England (London, 1616; Church 369), which includes an early copy of Smith’s map of New England. Goodspeed (1927) claims that this part of Hulsius’s Sammlung von Sechs und Zwanzig Schiffarten, inspired by the success of the more lavish de Bry series, appears to be "one of the rarest of the Collection." Hulsius managed to beat de Bry’s heirs to the press with an important German-language Americanum; it would appear in the Tenth Part of de Bry’s "Great Voyages" in Oppenheim the following year.A pivotal figure in the Jamestown Colony, Smith (1580-1631) had been forced to sail back to England in 1609 to care for an injury from a gunpowder accident, and was never able to return to the settlement. "In London, he actively promoted the further colonization of Virginia, but was unpopular with the Virginia Company. In April 1614, he returned to the New World in a successful voyage to the Maine and Massachusetts Bay areas, which he named New England" (APVA). "He sailed along the coast from Penobscot to Cape Cod in search of whales and mines of gold. The voyage was in most respects a failure, but it gave him an opportunity to write this tract, the general object of which is to show the advantages likely to accrue to adventurers in New England" (Church p. 852 on 1616 English ed.). The map of New England included in the Viertzehende Schiffart (identical to that which appeared in Hulsius’s parts 13—see item 60—and 20) is an accurate re-engraving of Smith’s influential original (omitting only the names in the lower corners, Smith’s title, and the verses). "The earliest thoroughly accurate map of Massachusetts Bay" (Winsor apud Church) and the first to name the region of "New England," Smith’s map is found in nine or more states, all printed from the same plate. Hulsius made his copy from the very rare first state. When drawing his map in 1614, Smith asked Prince Charles—later, Charles I—to replace the indigenous place-names with properly "English" ones. These are included here, although places such as London and Oxford would soon be renamed by subsequent colonists (Scituate, Marshfield, etc.); only three names from Smith’s map are retained today—Cape Ann, the Charles River, and Plymouth. The plate depicting the flora and fauna of New England balances realism—a porcupine, otter, and beaver—with fantasy—a griffon? Unsigned, this engraving was not reused in the de Bry version of the text. Levinus Hulsius (1546-1606) began publishing his 26-part series of voyages in 1598. The Schiffahrt volumes were generally more modest in size and price than those issued by de Bry, and as a result, they could often be sent to the press in a more timely fashion, allowing Hulsius’s heirs to scoop the competition. (Inventory #: 3501)
$16,500.00 add to cart Available from Martayan Lan
Share this item
Martayan Lan, Inc.
Offered by