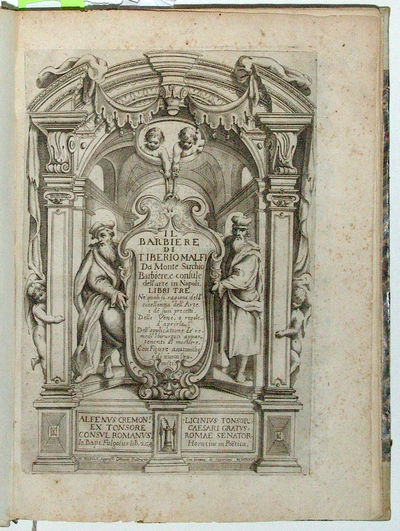 by MALFI, Tiberio
Naples: Ottavio Beltrano, 1626. Very rare first edition of this handsomely illustrated work on barbers giving detailed instructions on both the medical and aesthetic aspects of the profession. Published at a time when barbers saw their territory increasingly contested by professional surgeons, Malfi’s work stresses the medical knowledge of barbers and their expertise in performing important medical procedures. Illustrated with portraits of famous barbers in history, anatomical models and scenes showing surgical procedures, the work is a mirror of a profession that would undergo major change by the end of the century. The work is divided into three books. The first is concerned with the art of hairdressing, and includes chapters on the dignity of the beard (Malfi’s own consists of a large twirled mustache and a thin strip of goatee) and on the damaging and deforming effects of long hair on men, as well as descriptions of the instruments and techniques needed for hair cutting and grooming. The second chapter is dedicated to bloodletting, explaining the medical rationale behind it, and introducing basic anatomy and the location of veins and arteries. The instructions for the various procedures are detailed and practical, including advice on how to position the patient, what to do when the desired vein is difficult to raise, and how to collect the blood. The illustrations to this book range from anatomical woodcuts to engraved scenes with several figures and fully realized background landscapes. The final book covers various other surgical procedures which a barber might perform, including the application of leeches, suturing and other treatments of wounds, and the more macabre practice of cutting open a live chicken and pressing it to the head of a mentally afflicted patient, in order to infuse him with the dying bird’s animal spirit. Malfi, who was a barber and consul in Naples, emphasizes his erudition, citing a great number of classical and contemporary authorities ŌĆō his list of sources runs into three pages and precedes the table of contents. In addition, he seeks to underline just how indispensable the barber’s art is to the more socially distinguished physician, comparing the latter to an architect who relies on skilled craftsmen to turn his projects into reality. Malfi also gives a historical overview of his profession and lists illustrious barbers in history, including those of Cleopatra, Louis XI of France and the Italian poet Domenico Burchiello. This section is accompanied by eight quarter-page engravings of portraits with Latin inscriptions. The engraved title page has two barbers, extracted from works by Fulgosus and Horace, holding the title scroll inside an architectural frame. The early seventeenth century saw a number of publications on the art of the barber, written probably in response to the increased competition from surgeons and various kinds of charlatans. These include Courval, Satire contre les charlatans et pseudo-medecins empriques, Paris, 1610 ; Gilles, La Fleur des remedes contre le mal des dents, Paris, 1621, and D’Amato, Prattica nuova et utilissima di tutto quello ch’'al diligente Barbiero s’appartiene, Napoli, 1632. Barbers, along with surgeons, were usually allowed to attend medical lectures, and were sometimes called upon to perform anatomical demonstrations in universities., As a manual, rather than intellectual, trade, surgery was considered inferior to medicine. By the middle of the seventeenth century, the advent of ever more elaborate wigs led to the gradual separation of hairdressing from surgery, with the barber’s profession being eventually split into two. The present work is part of a small corpus of texts trying to uphold the unity and professionalism of that trade. OCLC lists UCLA, Yale, NLM, College of Physicians, Wellcome. The work was reissued under the title Nuova prattica della decoratoria manuale in 1629, and received a German translation in 1676. * Krivatsy 7316; Wellcome 3998; Waller I, 275 (2nd and German edition).. Large 4to [25.5 x 18.25 cm], (12) ff., including engraved title and author portrait, including 8 engraved portraits of barbers, 2 additional portraits, 11 full-page engravings of anatomical figures or surgical operations, 10 woodcuts. Bound in 19th-century quarter vellum and marbled papers over boards, with vellum corners, red morocco title label gilt, with some gilt tooling as well. Some marginal foxing and light browning; blank edge of N 1 renewed, without loss of printed surface. Otherwise a tall fresh copy, with the plates in good impression. (Inventory #: 3834)
$19,500.00 add to cart Available from Martayan Lan
Share this item
Martayan Lan, Inc.
Offered by